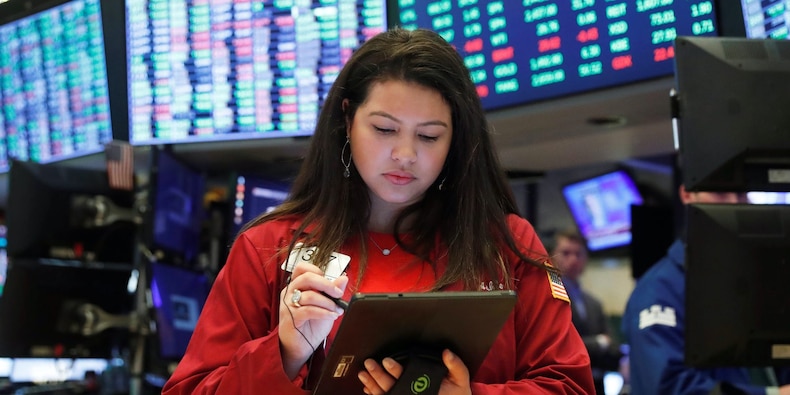 Traders work on the floor of the New York Stock Exchange shortly after the opening bell in New York, U.S., March 17, 2020.

US stocks were upgraded to overweight by the world’s largest asset manager on Monday.

BlackRock, which managed $7.8 trillion in assets as of September 30, said in a note that it expects the US stock market to benefit from structural growth trends and a cyclical upswing in 2021 as the economic recovery begins to accelerate.

“We upgrade US equities to overweight, with a preference for quality large caps riding structural growth trends, as well as smaller companies geared to a potential cyclical upswing,” BlackRock said.

The asset manager said investors should look through any market volatility caused by a continued surge in daily COVID-19 cases and instead focus on the longer term, as a vaccine for the virus is likely just months away from being made available to the masses.

Read more: A Wall Street strategist breaks down why bitcoin’s latest surge past $18,000 is sniffing out a major downward spiral in the stock market’s hottest trade

“Positive vaccine news reinforces our outlook for an accelerated restart during 2021, reducing risks of permanent economic scarring,” BlackRock said, adding that they expect the cumulative economic hit from COVID-19 to be “just a fraction” of that seen during the Great Recession of 2008.

BlackRock favors US stocks over global counterparts due to their high concentration in technology and healthcare companies, which are financially healthy and are also benefiting from some key structural trends that show no signs of slowing down.

For example, information technology and communication services represent almost 40% of the market value of the MSCI USA Index, compared to just 11% in Europe, BlackRock observed. On top of that, Europe has a high allocation to financial stocks, which BlackRock sees challenged by low interest rates.

For these reasons, combined with renewed COVID-19 restrictions set to limit economic growth over the coming months, BlackRock downgraded European stocks to underweight.

Key risks to BlackRock’s bullish view on US stocks include the winding down of emergency support facilities from the Fed and US Treasury, which highlights the potential for a lack of additional fiscal relief from Congress, according to the note.

Read more: ‘The unwinding of this bubble is going to be painful’: A renowned stock bear says today’s investors can expect negative returns for the next 12 years – and warns of a looming 66% stock plunge

Ford on watch after Barron's says shares could double

Rudy and Sidney’s Krakentastic Spectacle, and What It Could Mean

Arrowroot Capital Completes Sale of its Interest in SocialChorus, the Global...

Investors Diurnal Team - July 24, 2020 0
SANTA MONICA, Calif., July 24, 2020 /CNW/ -- Arrowroot Capital Management, LLC ("Arrowroot"), a global growth equity firm in Santa Monica California, today announced the sale of its interest in portfolio company SocialChorus, Inc. ("SocialChorus"), the leader in end-to-end employee communications and engagement software solutions, to Sumeru Equity Partners L.P. ("Sumeru"). Arrowroot will continue to own a minority interest in the company. Since Arrowroot's initial investment in 2018, SocialChorus has successfully evolved from an employee social advocacy solution into a mission-critical enterprise workforce communications platform for the world's largest companies with global, disparate workforces. With Arrowroot's partnership, SocialChorus made significant investments in technology, grew its sales & marketing headcount, and expanded its global presence. "I want to thank the team at Arrowroot for believing in us," said Gary Nakamura, CEO of SocialChorus. "We've enjoyed working with Arrowroot and their operating consultants (SRG) over the years and are excited to continue to call them friends and partners for many years to come." "In late 2017, we met with Gary and team and were deeply impressed with their early leadership position in this increasingly crucial and urgent market," said Kareem El Sawy, Partner at Arrowroot Capital and Board Member of SocialChorus. "Since then, we have had the privilege of partnering with a top tier management team and seen them rapidly execute on their goal of becoming the global leader in employee communications and engagement software." GCA Advisors, LLC acted as lead financial advisor to SocialChorus for this transaction. About Arrowroot Capital Arrowroot Capital is a global growth equity firm based in Santa Monica, CA, focused on minority, majority, and buyout investments in B2B software companies. The firm serves as a catalyst for growth-related initiatives by partnering with management and leveraging its deep enterprise software expertise to deliver meaningful, tangible value. Learn more at www.arrowrootcapital.com. About SocialChorus SocialChorus is the leading workforce communications platform that empowers companies to work as one. We've built the only end-to-end solution that can reach, inform, and align every employee from the shop floor to home office. Employees get what they need, communicators and leaders focus on the message, and the platform takes care of the rest. Learn more at www.socialchorus.com. View original content:https://www.prnewswire.com/news-releases/arrowroot-capital-completes-sale-of-its-interest-in-socialchorus-the-global-leader-in-workforce--employee-communications-to-sumeru-equity-partners-301099655.html SOURCE Arrowroot Capital Management, LLC
Markets

How to get hired at Microsoft, according to current and former...

Investors Diurnal Team - November 4, 2020 0
Total value of DeFi-locked funds plunged about $1 billion over recent days COMP price collapsed over 70% in the past 3 months to trade below $100 The price action is now approaching the key short-term support line at around $79 Compound (COMP) price has continued its collapse this month after losing about 65% since August Fundamental analysis: DeFi Investors lock in profits  A high number of DeFi coins are still far away from their highs in spite of Bitcoin hitting its yearly peaks.  Are you looking for fast-news, hot-tips and market analysis? Sign-up for the Invezz newsletter, today. Data by crypto intelligence provider IntoTheBlock indicates that DeFi token prices and protocol metrics have deviated substantially since September, with the total value locked plunging about $1 billion over recent days but managed to close to its all-time peaks. However, prices of DeFi tokens are still significantly down, with some of them dropping as much as 50% compared to their highs. IntoTheBlock report alleges that this deviation could be a result of a transition to a risk-off environment as investors have been locking in profits. DeFi tokens with high supply inflation tokens were affected the most, with Compound, Balancer, MCDEX,