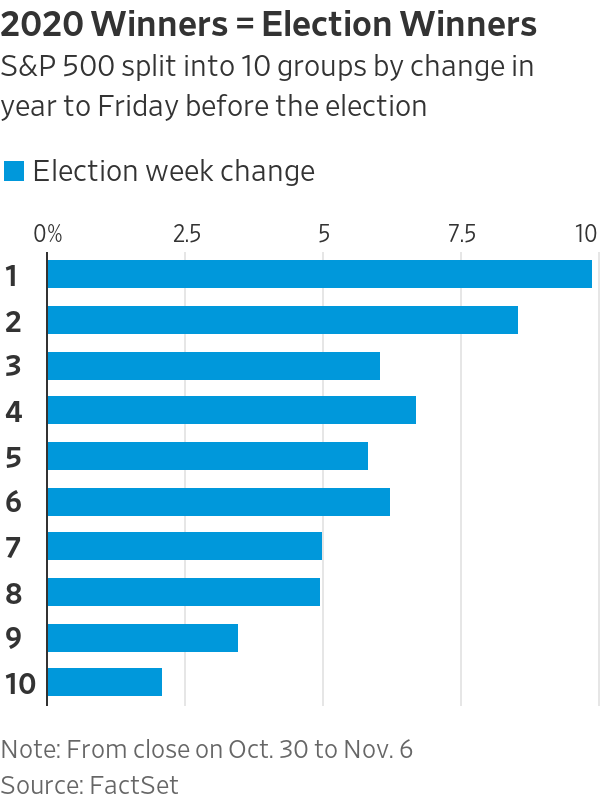 The same investment formula that has worked for the past decade worked again in 2020, and then proved the best approach to election week too as Joe Biden took the White House: Big Tech and other expensive growth stocks won, and cheap and small stocks underperformed.

Then news of a positive trial result on
Pfizer
and BioNTech’s Covid-19 vaccine on Monday kick-started something more remarkable: a bet on a return to normal, with cheap and small stocks soaring and expensive growth stocks lagging far behind.

It isn’t that financiers don’t care about politics. It’s just that most of the time, other things matter more, especially the Federal Reserve and the pandemic.

Quite apart from funneling cash into the campaign on both sides, Wall Street has churned out endless analyses of the election’s impact on stocks. There were also big market swings on election night and as the count progressed. For all that, last week the winners were the stocks that had already won in 2020, and over the past three, five and 10 years.

It was a good week for stocks in general, in large part because the worst fears of civil unrest around a disputed result weren’t realized. But break the S&P 500 into 10 groups by performance for the year up to the Friday before the election, and the alignment to last week’s performance is remarkable. The laggards lagged behind. The winners kept winning. Does it really matter who the president is?

The reality is that the market performance was a direct result of the election, because the split Congress left stimulus primarily in the hands of the Fed. Congressional gridlock isn’t assured, as Republican leads in Georgia’s Senate seats could be reversed in runoff votes. But the bet is that President-elect Joe Biden won’t be able to get as big a stimulus through as if the widely forecast “blue wave” had handed the Senate to Democrats. 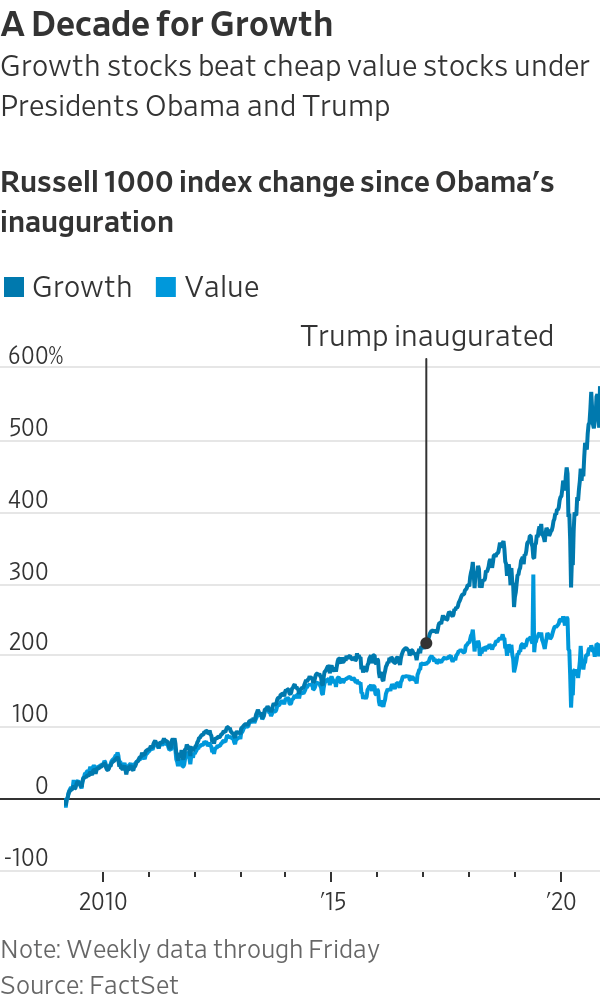 That meant the Fed will have to do more, which meant lower bond yields. Lower Treasury yields help growth stocks, much of whose earnings are far in the future, by making future profits worth more compared with what could be earned from ultrasafe Treasurys until the earnings appear.

All of this is in line with conventional wisdom from before the election. There’s a widespread belief on Wall Street that stocks historically performed better on average under gridlock than under either Republican or Democrat unified government, even though it depends heavily on the time period chosen.

I can answer, but the danger is that this is merely a rationalization after the event. Big growth stocks were raking in profits during the Obama years because they were successful and expanding fast, which had nothing to do with the president. Their valuations only started rising more than the rest of the market after they became the biggest beneficiaries of the Trump tax cuts, and then last year the biggest beneficiaries of Fed easy money.

The Fed’s power over Big Tech is remarkable. As an example, look to the last time the Fed reduced monetary support, in 2018. Back then, the forward price-to-earnings ratio of the Russell 1000 Growth index fell in line with Russell’s competing index of cheaper value stocks.

Saying that the Fed is again the most important driver of stocks isn’t to say Mr. Biden will have no effect, of course. There’s plenty he can do with executive orders, just as Mr. Obama and Mr. Trump did. That’s one reason alternative energy stocks performed well last week.

Consider Wall Street’s lists of Biden and Trump winners. Just over half of the 50 stocks JPMorgan Chase analysts tagged as Biden winners beat the S&P 500 last week, most of them linked to alternative energy and health care. The infrastructure-linked stocks on the list almost all lagged behind, because a big spending plan will be hard to get through. Only a quarter of the Trump list beat the index, as the purported Trump winners were dominated by oil, banks and Covid normalization bets such as airlines, cruise lines and entertainment.

Much of that went into reverse on Monday morning, after the Covid-19 vaccine developed by Pfizer and Germany’s BioNTech proved more than 90% effective. Again, the result illustrated how important low Treasury yields have been to the triumph of growth stocks over cheap value stocks, and bigger companies over smaller companies. The early reaction was a 0.13-percentage-point rise in 10-year Treasury yields, a very large move. The tech-dominated Nasdaq rose 1.5%, while S&P 500 futures clocked up a 4.4% rise and the Russell 2000 index of smaller companies leapt 5.7%.

The major danger for Big Tech and other growth stocks is that the economy recovers faster than expected, either because Monday’s vaccine news sticks and Covid-19 is beaten or because the Senate proves less of a block to fiscal stimulus than currently thought. The Fed could then dial back monetary support, and Treasury yields rise.

Why pay up for already-expensive growth stocks when cheap, struggling companies suddenly have decent prospects again? That’s something with bipartisan appeal.

Health experts say having a vaccine is just one front in a two-front battle against COVID-19. The other is effective treatments for those who are already sick with the disease. WSJ breaks down the three most promising types in development. Photo Illustration: Jacob Reynolds/WSJ.

Write to James Mackintosh at James.Mackintosh@wsj.com

A rush to expand the US-Mexico border wall that many fear...

Gap, Deere, HP, Dell: What to Watch When the Market Opens...

What Markets Are Telling Us as Election Results Roll In

Pfizer, McDonald's, Delta, Biogen, F5 Networks: What to Watch When the...