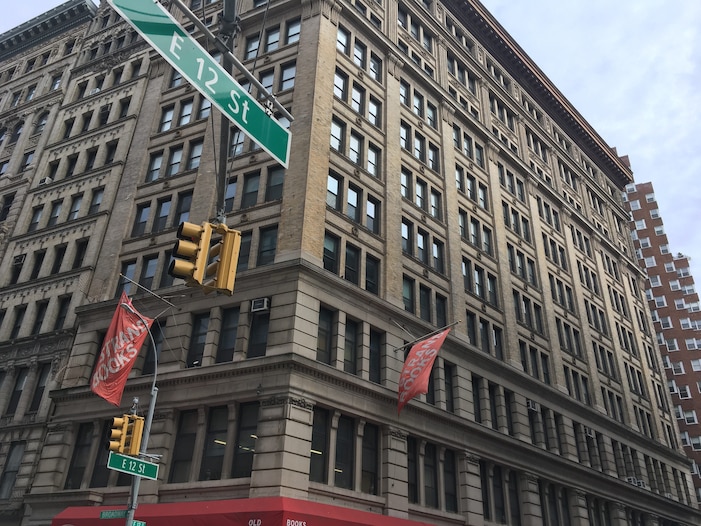 Bass Wyden inherited 828 Broadway, where the Strand is located, from her father.

On a Wednesday morning this October, Uzodinma Okehi gathered with his coworkers on the first floor of the Strand Book Store, the beloved institution in the heart of New York City’s Greenwich Village, where he’s worked for nearly 20 years.

The Strand’s owner, Nancy Bass Wyden, had called the staff together for a grave talk.

She gave it to them straight. Revenue was down 70% since this time last year, the business’ cash reserves had depleted, and the $1 million to $2 million loan the Strand received in government emergency relief in April was running dry.

For the first time since her grandfather founded the store 93 years ago, Bass Wyden said, the time had come to ask customers for help. Start the holidays early, she said. Shop the Strand to save the Strand.

Bass Wyden started working at the Strand in the mid-’70s, when she was 16, and inherited full ownership of the business, including the building at 828 Broadway, from her father, Fred Bass, after his death in 2017.

The bookstore has withstood the Great Depression, two World Wars, and the 9/11 terror attacks, but, Bass Wyden said, a pandemic could be its downfall.

“It’s tough for small-business owners,” she said. “We survived e-books — even Amazon was fine. But COVID is really what has stopped us in our socks.”

Strand workers Insider spoke with said some of the business’ challenges are self-inflicted. We spoke with eight current and former employees, some of whom asked to speak on the condition of anonymity.

They described staff-wide discontent with Bass Wyden’s management, fear for their jobs and those of their coworkers, and feelings of being overwhelmed as business surged unexpectedly.

Their comments also reveal a tension at the heart of the Strand in the time of COVID.

America’s economy has ground to a halt over the past six months. Over 60 million Americans have filed for unemployment insurance — more than the entirety of the 18-month-long Great Recession — and nearly 100,000 small businesses have closed for good.

In July, an American Booksellers Association survey suggested that 20% of independent bookstores were at risk of closing. Allison Hill, the CEO of the association, said that number could now be higher, with more than one store closing every week, on average, since the pandemic began.

Survival then has been a challenge for any bookstore or small business. But the Strand isn’t any regular bookstore. And Bass Wyden isn’t a regular small-business owner.

Many employees work there out of a devotion to the written word and love for fellow bookworms, they said. Now, however, that idealism is hitting up against the reality of the tough decisions that many businesses like the Strand are having to make during the pandemic.

'Candy should not be more important than our lives': Mars Wrigley warehouse workers are calling for safe working conditions during the COVID-19 pandemic

Billions of dollars are up for grabs as marketers get ready to spend again, but it will be tough for the ad giants like...

China can no longer rely on old model of development, time...

Is Silver a buy or sell right now?

Investors Diurnal Team - October 16, 2020 0
Similar to other precious metals, silver performance was outstanding this year. Silver prices has surged 38.3% year-to-date compared to gold’s 25.7%. Fundamental analysis: A high demand The big part of that surge occurred in the third quarter during which silver surged 33%. Demand for silver has been through the roof recently and the Silver Institute categorized that demand across 5 groups: industrial, photography, jewellery, silverware, and physical investment.   Are you looking for fast-news, hot-tips and market analysis? Sign-up for the Invezz newsletter, today. In four of those, the demand was slightly lower in 2019, compared to a year before. But in the industrial category, demand for solar panels recorded a 6.7% surge. However, the biggest increase has been registered in the physical demand, where the demand for silver jumped by 12.3% in 2019, compared to 2018. Analysts believe that this trend will also continue this year, thanks to the impressive price gain year-to-date. Furthermore, analysts at investment bank Goldman Sachs estimated worldwide solar installations to grow by 50% between 2019 and 2023 as green energy silver demand moves up. One of the signs pointing to the ‘stickiness’ of silver ETF purchasing has been detected in the activities of Robinhood account owners. Four different periods of weakness have been identified since the silver stocks selloffs in March through SIL ETF.  The number of SIL owners slightly slipped in March, but after that, they hardly weakened even after a price pullback. Technical analysis: Buyers eye levels above $30 The so-called “smart money” silver hedgers are lacking around 56,000 contracts, indicating that bullish sentiment is still not likely. Given the metal’s 2020 performance, we may see a longer consolidation before another rally takes place.  Silver weekly chart (TradingView) For the consolidation to end, the silver price would likely have to travel the north of $27. The horizontal resistance comes around $26, while the descending trend line that connects two latest swing highs is now located at about $27. If silver buyers push through this resistance, then watch out for a move to $30.60. Summary Silver prices have skyrocketed this year, recording a 38.3% price surge since the start of 2020 thanks to an extraordinary rise in demand across various categories, especially physical. A move above $27 on a daily/weekly basis is likely to open the door for a trip above the $30 mark.
Markets