KITEX GARMENTS is one of the largest private companies in Kerala, a communist-led state in southern India. Its embrace of corporate social responsibility (CSR) is enthusiastic. In the fiscal year ending in March 2020 it allocated 5.3% of its average profit over the past three years to public roads, schools, housing and safe drinking water. That makes it a poster-child for an Indian law passed in 2013, in the aftermath of a corporate fraud scandal, that requires Indian companies to divert at least 2% of annual profits to CSR projects.

Arguments leading up to the law’s approval pitted NGOs and populist politicians, who supported it, against India Inc, which said it merely created a new tax. Several big corporate contributors argued that philanthropy would be damaged by government involvement. A new study by Shivaram Rajgopal of Columbia Business School and Prasanna Tantri of the Indian School of Business suggests that last group has a point.

The researchers sifted through the filings of 39,000 companies to see how behaviour changed. Advocates of the law will be pleased to see that the sum the average company channelled annually to CSR efforts rose slightly in fiscal 2014-19, compared with 2009-14. It was not, however, an unalloyed triumph. Kitex, with its consistently high charitable contributions, turns out to be an exception. 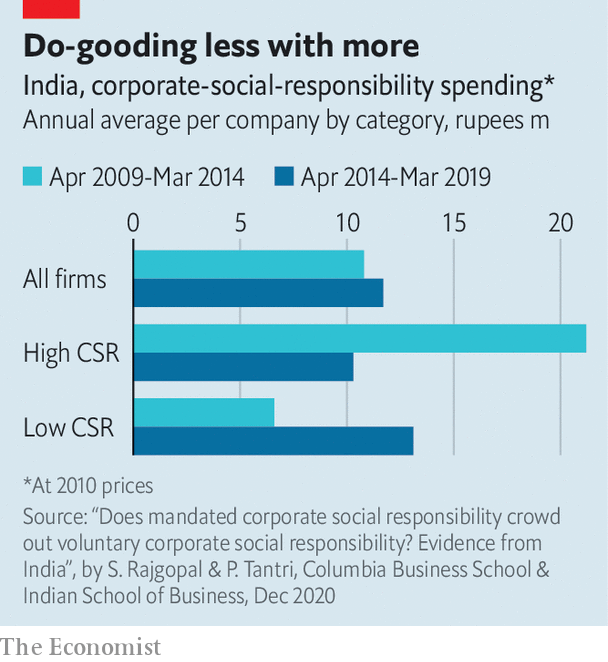 Of the 2,152 companies that gave more than 5% of profits before the law went through, average real contributions fell by half (see chart). In place of spending on social causes, Mr Rajgopal and Ms Tantri found increased spending on advertising.

Economists studying CSR spending posit three possible incentives for it: genuine altruism; private interests of managers who enhance their own position with corporate cash; and improved performance and valuations as a consequence of a burnished reputation among customers and better morale among employees.

If the first two were at work, Mr Rajgopal and Ms Tantri speculate, India’s biggest spenders would not have cut back: setting a minimum payment would impede neither altruism nor benefits to managers. Instead, the reduced payments suggest that past spending was mostly about “signalling value”. Once they became obligatory, CSR payments were seen as merely another component of regulatory compliance. Or, as Mr Rajgopal concludes, “The halo was lost.”

The question left open by the study is where CSR money goes and whether that too has been affected by the law. Many Indian businesses are family-controlled. Their CSR contributions often go from the companies to charitable entities also controlled by the families. India’s largest company, Reliance Industries, for example, directed 94% of its 2019 contributions to the Reliance Foundation, chaired by Nita Ambani, the wife of Mukesh Ambani, Reliance’s largest shareholder and boss. To its credit, Reliance discloses these contributions. Many others are less forthcoming.

Where CSR money ultimately ends up is often unclear. Some may flow into India’s political system. Kitex is again the exception. The company’s allied do-gooding arm is quite transparent about supporting political candidates and has spoken out about its efforts to do so in response to past government failures. This, it would argue, is the socially responsible thing to do. ■

American trustbusters force Visa to back off Plaid

Who are the five people who died in the US Capitol riot?

The next big thing in retail comes with Chinese characteristics

A tech CEO’s guide to taxes

Investors Diurnal Team - January 7, 2021 0
THANKS FOR contacting me for an update on the international corporate-tax landscape. For global tech firms like yours, the headlines make worrying reading. A fragile transatlantic truce has been shattered. France has resumed collecting the digital-services tax it introduced in 2019, targeting tech firms (and catching others in the net). The outgoing Trump administration has lined up retaliatory tariffs on $1.3bn of posh French handbags, cosmetics and more, ready to pull the trigger. If America acts, the European Union may strike back against American products of equivalent value. America complains that national tech taxes unfairly target its digital giants. It had better get used to them. Such levies, typically 2-3% of local sales, are spreading as governments try to claw back taxing rights lost in a dysfunctional global system. Among those joining France in implementing or mulling a digital tax are Brazil, Britain, India and Italy. An EU-wide version has been mooted. You don’t need me to tell you that this is just one front on which big tech is being assailed, alongside alleged anticompetitive behaviour, the handling of user data and the policing of speech. Employees are growing restless, too. I imagine you
Business

Investors Diurnal Team - January 19, 2021 0
In a report on Tuesday, Premier Foods plc (LON: PFD) said that its digital sales in the fiscal third quarter came in 90% higher than the same quarter last year. On the back of robust Q3 sales, the company said that it now expects its annual profit to remain resilient this year. The maker of Bisto Gravy and OXO cubes now forecasts its full-year trading profit to fall in the range of £145 million to £150 million. In the third quarter, the St Albans-based company added, overall sales posted a 9% annualised growth. Earlier in January, Premier Foods launched its new range of Easter cakes for 2021. Are you looking for fast-news, hot-tips and market analysis? Sign-up for the Invezz newsletter, today. Premier Foods is currently trading at 104 pence per share after recovering sharply from a low of 19 pence per share in March 2020 when the impact of the COVID-19 crisis was at its peak. AO World’s third-quarter UK sales jump 67.2% In related news, AO World plc (LON: AO) said that its third-quarter sales in the United Kingdom saw a 67.2% year over year growth. The online retailer attributed the surge to the ongoing COVID-19 crisis and said: “We’ve seen ten years of change in ten months, and experienced our strongest ever peak trading period.” For the three months that concluded on 31st December, AO World recorded £457.3 million of sales. AO World had swung to £18.3 million of profit in the fiscal first half, as per the