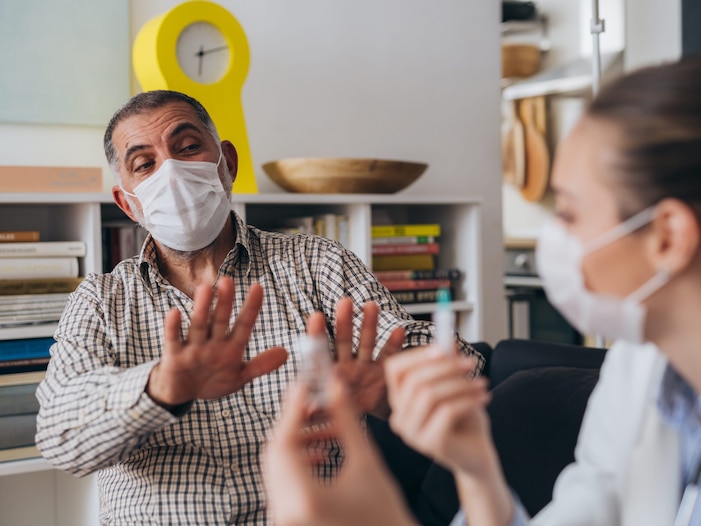 A COVID-19 vaccine is being rolled out in America, slowly but surely. Yet not everyone is willing to take it, despite decades of evidence for the safety and efficacy of vaccines.

Polls have found that a shrinking but significant minority of people are hesitant to get vaccinated. And reports have emerged that a large number of healthcare and frontline workers have said they plan to skip the shot.

It will likely be a while before workplaces that have gone remote can resume business in-person. But when they do, they may have to reckon with the thorny issue of employees who don’t want to be vaccinated.

‘This is about the comfort of your peers’

Presenting evidence-based arguments will likely do little to sway people who’ve made their minds up, according to Peter Cappelli, who studies management  at the Wharton School of the University of Pennsylvania.

“Trying to persuade them of the facts of the case is not going to get you very far,” Capelli told Insider. “They’re just denying science.”

Instead, employers should ask their workers to consider the comfort of their coworkers.

Asking employees to consider their colleagues is useful for two reasons. First, it appeals to their sense of care for their coworkers.

“It’s sort of like trying to get people to quit smoking,” Capelli said. “You talk about the consequences to the people around them, and the people they care about.”

Second, it appeals to their desire to remain a part of the in-group and not be shunned.

“You don’t want to be the person standing out,” Capelli said.

Directives should come from the top

The duty of telling employees to get vaccinated should fall on workplace leaders, not middle management, Capelli said.

Larger workplaces may consider creating a special post for a qualified medical professional who can endorse vaccine directives. Doing so lends vaccination directives an expert authority that most workplace leaders lack.

Workers should understand that they are being given a directive from above, not a request with the option to say no.

“You’re telling them, ‘this is what we want you to do, and here’s why we need you to do this,”” Capelli said.

Capelli believes that as mass vaccination becomes a reality, resistance will shrink, especially as employers begin requiring getting the shot to return to the workplace.

“It’s one thing to, to say you object to this when there are no consequences,” Capelli said, “and it’s another when you have to actually face up to some of the consequences.”

Investors Double Down on Stocks, Pushing Margin Debt to Record

Iran moves to outlaw sexual violence and harassment of women

Taiwan Bourse May Be Stuck In Neutral On Tuesday

Investors Diurnal Team - July 24, 2020 0
Viewers Can Access Comedy Dynamics, CONtv, Docurama and Dove Channel Content Via the Redbox app for the Roku® platform, iPhone®, Apple TV®, Android-enabled devices, VIZIO SmartCast TVs and LG Smart TVs LOS ANGELES, July 24, 2020 (GLOBE NEWSWIRE) -- Cinedigm (NASDAQ: CIDM) announced today that four of the Company’s most popular offerings Comedy Dynamics, CONtv, Docurama and Dove Channel are now available on Redbox’s new Free Live TV streaming platform. Long-established as America’s destination for entertainment, Redbox is once again providing their users with even more value, choice and convenience with Redbox Free Live TV. The new service is curated to the interests of the broad Redbox audience, offering a growing selection of live-streamed films and series free of charge. Redbox Free Live TV viewers can easily enjoy Comedy Dynamics, CONtv, Docurama and Dove Channel exclusive programming libraries by clicking “Free Live TV” and selecting their prefered channel within the Redbox app for the Roku® platform, iPhone®, Apple TV®, Android-enabled devices, VIZIO SmartCast TVs and LG Smart TVs. Comedy Dynamics - The largest collection of stand-up comedy! It’s a no-drink minimum stand-up show 24/7, with the top names of comedy in new & classic performances. Docurama - The first network dedicated solely to documentary and factual entertainment. Enjoy full-length feature films & TV series spanning arts, politics, science, music & history. Everything Else Is Pure Fiction. CONtv - Waste the best years of your life on hours of pop culture essentials: enigmatic sci-fi, fantasy, horror, cringe-worth grindhouse and retro film & TV series. Dove Channel - Dedicated to safe family-friendly entertainment. Movies, iconic television shows. Dove Channel brings family viewing back to America. “Since its inception, Redbox has revolutionized the home entertainment industry, making it easier than ever for viewers to access their favorite films and series,” said Tony Huidor, Cinedigm’s Senior Vice President of Product & Technology. “With the launch of Redbox Free Live TV, they are poised to do so yet again, and Cinedigm is proud to join forces with them to bring our popular Comedy Dynamics, CONtv, Docurama and Dove Channel networks to their loyal audience. This partnership perfectly complements our own strategy to redefine the traditional viewing experience, putting the power firmly in the viewer’s hands, and offering a diverse range of content that they can enjoy whenever and wherever on any device they choose.” ABOUT CINEDIGMFor more than twenty years, Cinedigm (NASDAQ: CIDM) has led the digital transformation of the entertainment industry. Today, Cinedigm entertains hundreds of millions of consumers around the globe by providing premium content, streaming channels and technology services to the world’s largest media, technology and retail companies. For more information, visit https://www.cinedigm.com/. Press Contact for CIDM:Jill Calcaterra310-466-5135jcalcaterra@cinedigm.com
Markets

Investors Diurnal Team - January 16, 2021 0
Tim Cook. Karl Mondon/Digital First Media/The Mercury News via Getty ImagesApple has begun internal testing on foldable screen prototypes for iPhones, but hasn't yet decided whether to move forward with such a model, Bloomberg reported.  The company has been testing the screen prototypes, rather than a full iPhone model, according to the report. It's unlikely a foldable phone would be included in its 2021 lineup, which is expected to focus on incremental upgrades to the 5G models released last year, according to Bloomberg. The company's 2021 models may include fingerprint-scanning Touch ID in their displays, according to the report. That technology had been removed in favor of facial recognition in recent models.  With a foldable iPhone model, Apple would join a growing list of competitors with similar phones. Samsung, which has several foldable models, announced its Galaxy Z Fold 2 in August 2020. LG last week showed off its rollable phone prototype, the LG Rollable, in a CES video. Samsung's Galaxy Z Fold 2. Samsung Apple in recent years filed for several patents for foldable smartphone designs. Last year, the company was granted a patent for foldable-smartphone hinges. Those hinges would sit under the screen.  Read more: Apple is on a cloud hiring spree - here are the key technologies it wants new employees to know Another Apple patent, "Foldable electronic device with exposed display region," included illustrations of folding phone screens. Those illustrations appeared to show an iPhone screen roughly the same shape as current iPhones, but with a horizontal hinge across its center, allowing it to fold in half. As the patent said, the "pair of side platforms are switched between a flattened state and a folded state." Samsung's Galaxy Z Fold 2 is about 6.2-inches when folded in half. Prototypes for Apple's foldable screen were about the size of the biggest current iPhone model, 6.7-inches, when unfolded, according to Bloomberg.  In December, an Apple supplier in China was accused of using forced labor from thousands of Uighur workers to make glass for iPhones. The same month, Apple put iPhone partner Wistron on probation after rioting workers caused $7 million worth of damage at a plant in India. Apple is also reportedly removing the Touch Bar from its MacBook Pro this year.  An Apple spokesperson did not immediately respond to Insider's request for comment.