Arrests in Paris as thousands join French May Day protests

Hooded, black-clad demonstrators clashed with police in Paris on Saturday as thousands of people joined traditional May Day protests across France to demand social and economic justice and voice their opposition to government plans to change unemployment benefits.

Police made 46 arrests in the capital, where garbage bins were set on fire and the windows of a bank branch were smashed, momentarily delaying the march.

More than 106,000 people marched throughout France, including 17,000 in Paris, according to the Interior Ministry.

Trade unionists were joined by members of the “Yellow Vest”movement, which triggered a wave of anti-government protests three years ago, and by workers from sectors hit hard by pandemic restrictions such as culture.

At some point last summer, there were just too many reports of protesters who had experienced abnormal menstrual cycles after being exposed to tear gas for Britta Torgrimson-Ojerio, a nurse researcher at the Kaiser Permanente Centre for Health Research in Portland, Oregon, to dismiss them as coincidence.

A preschool teacher told Oregon Public Broadasting that if she inhaled a significant amount of gas at night, she would get her period the next morning. Other Portland residents shared stories of periods that lasted for weeks and of unusual spotting. Transgender men described sudden periods that defied hormones that had kept menstruation at bay for months or years.

Torgrimson-Ojerio decided she would try to figure out whether these anecdotes were outliers or representative of a more common phenomenon. 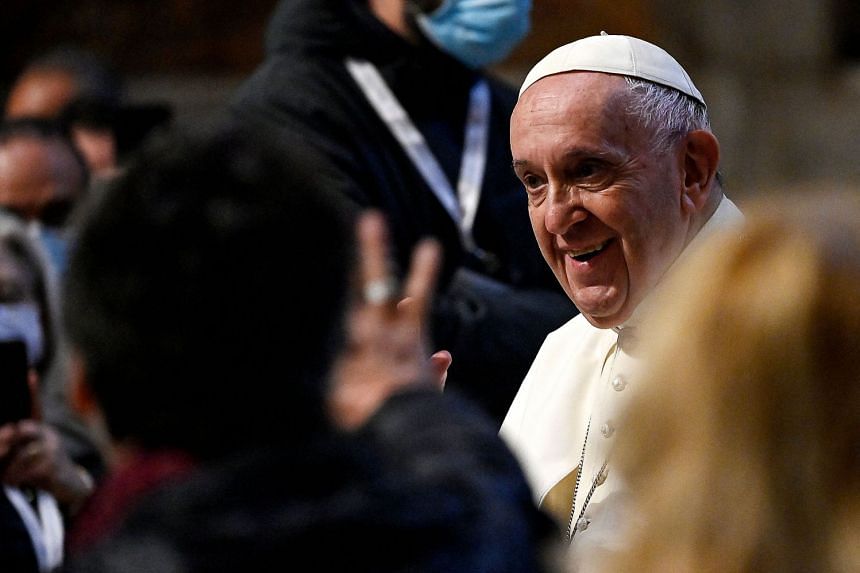 Pope Francis on Saturday launched a month-long prayer marathon to hasten the end of the coronavirus pandemic with a prayer at St Peter’s Basilica in the Vatican before some 150 believers.

The Argentinian pontiff gave the inaugural rosary prayer to kick off a series which will be streamed live each day this month at 1600 GMT (midnight Singapore time) from different Catholic shrines across the world.

They range from Fatima in Portugal and Lourdes in France to shrines in Poland, Nigeria, Cuba and South Korea as well as the Basilica of the Shrine of the Immaculate Conception in Washington. 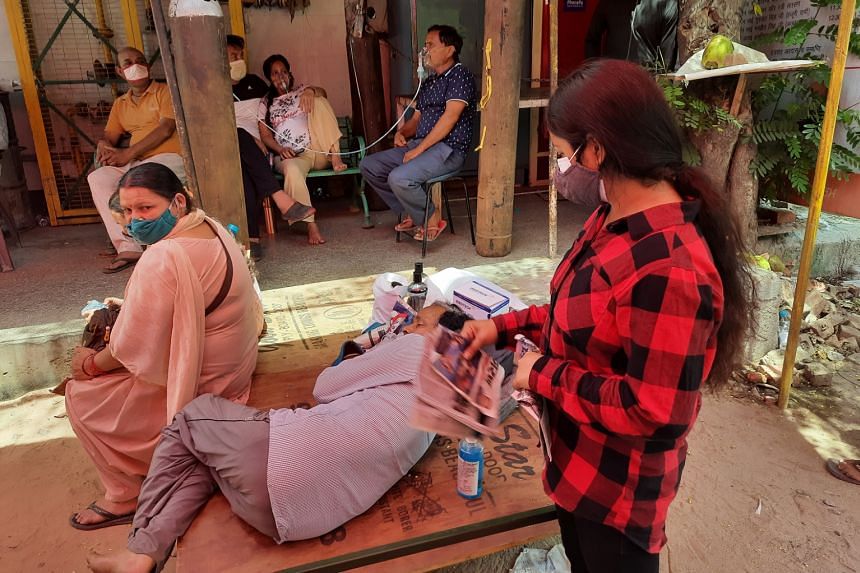 An out-of-breath woman trudges in, aided by two young men. The Covid-19 patient is teetering close to a collapse, not unlike India’s health infrastructure in the ferocious second wave of the pandemic.

“I am dying. I am dying,” she screams. Her son wails for help: “Is there anyone?”

Just when it seemed all doors had been slammed shut, this family has found one ajar. After being shunted from one hospital to another for days, they have finally come to a Sikh temple in Ghaziabad, near Delhi, desperate for a few hours of medical oxygen. And it does not let them down. 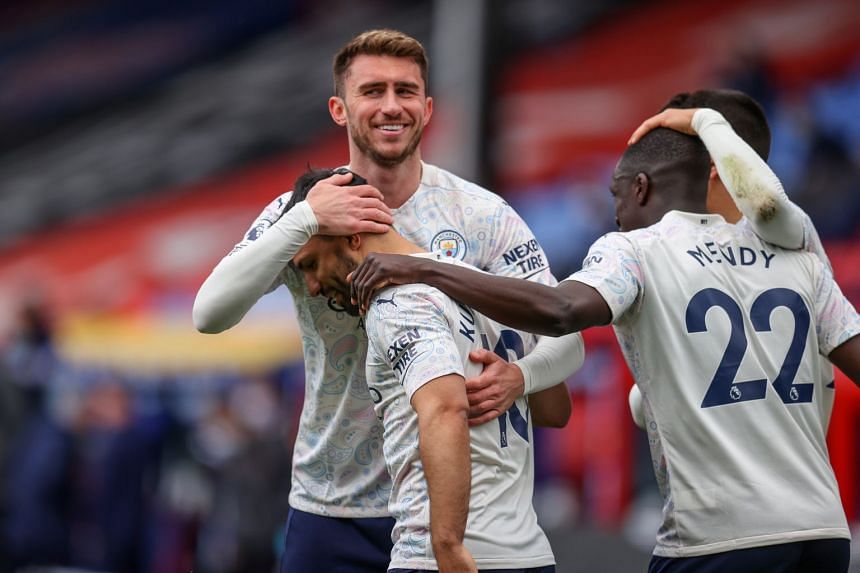 Manchester City were on the brink of clinching the Premier League title after a 2-0 win against Crystal Palace on Saturday, while Chelsea maintained their hold on fourth place after beating Fulham by the same scoreline.

Pep Guardiola’s side moved 13 points clear at the top thanks to second-half goals from Sergio Aguero and Ferran Torres at Selhurst Park.

City will be crowned English champions for the third time in four seasons if second-placed Manchester United lose at home to Liverpool on Sunday.

Should I invest in gold in April?

Russian Parliament leader says Covid-19 could be linked to US lab...

Investors Diurnal Team - April 28, 2021 0
MOSCOW (XINHUA, AFP) - The novel coronavirus could be associated with a leak from a US biological laboratory, said Vyacheslav Volodin, chairman of Russia's Lower Parliament House the State Duma, on Tuesday (April 27). "There was a leak from one of those laboratories that they have opened around the world. It would be right if the government of the Russian Federation raises the issue (of responsibility for the Covid-19 outbreak)," Volodin told a session of the Council of Legislators. "The US laboratories where scientists study, explore and maybe even create new biological weapons are now located in Georgia, in some counties of Eastern Europe. That must be taken under control," he said, according to an official press release. According to media reports, the United States has set up many bio-labs in 25 countries and regions across the Middle East, Africa, South-east Asia and former Soviet Union, with 16 in Ukraine alone. Some of the places are believed to have been involved in biological militarization activities. Previously, a team commissioned by the World Health Organisation (WHO) to investigate the source of the coronavirus in Wuhan in January concluded that it was "extremely unlikely" that the pathogen originated in a
World News

Investors Diurnal Team - April 26, 2021 0
MOSCOW (AFP) - Russian prosecutors on Monday (April 26) suspended the activities of Alexei Navalny's regional offices, in a move that his team said would essentially shut down the jailed opposition figure's movement. The move comes after Navalny, President Vladimir Putin's most outspoken critic, ended a hunger strike last week that he had launched to demand proper medical treatment in prison. A court in Moscow on Monday began proceedings into designating Navalny's Anti-Corruption Foundation (FBK) and its regional offices "extremist" after prosecutors requested that they be added to a list run by Russia's Anti-Terrorism Committee. "The activities of Navalny's offices and FBK were immediately suspended," FBK's director Ivan Zhdanov wrote on Twitter, attaching screenshots of a prosecutor's decision. The Moscow City Court confirmed that the activities of the group's regional network were suspended, but clarified that prosecutors had the power to make the decision and said a final decision designating the group as extremist was due. Navalny's office in Moscow said in a statement that the group will "no longer be able to work" as usual. "It would be too dangerous for our employees and for our supporters," it said. The team promised to continue
World News

Investors Diurnal Team - April 22, 2021 0
JERUSALEM: A Syrian anti-aircraft missile landed in southern Israel early Thursday, setting off air raid sirens near the country's top-secret nuclear reactor, the Israeli military said. In response, it said it attacked the missile launcher and air-defense systems in neighboring Syria. Israeli media later described the Syrian missile as an "errant" projectile, not a deliberate attack deep inside Israel. In recent years, Israel has repeatedly launched air strikes at Syria, including at military targets linked to foes Iran and the Lebanese Hezbollah militia, both allies of Syrian President Bashar Assad. Such strikes routinely draw Syrian anti-aircraft fire. Thursday's exchange was unusual because the Syrian projectile landed deep inside Israel. Syria's state news agency SANA said the exchange began with an Israeli air strike on Dumeir, a suburb of the capital of Damascus. Dumeir is believed to house Syrian army installations and batteries as well as bases and weapons depots belonging to Iran-backed militias. SANA said four soldiers were wounded. The Britain-based Syrian Observatory for Human Rights, an opposition war monitoring group based in Britain that tracks Syria's civil war, said the Israeli strikes hit an air defense base belonging to the Syrian military and destroyed air defense batteries in the