Detroit has shown that it can deal with pandemics. The question now, particularly as results from Tuesday’s presidential election continue to favor Joe Biden, is whether it can handle electric vehicles.

General Motors
reported $5.3 billion of adjusted operating profit for the three months through September, giving a margin of 14.9%. This kind of profitability is what investors typically expect from other makers of technologically complex products, but remains almost unheard of in the car industry. GM’s shares rose just 2% on a strong day for stocks.
Ford
and
Fiat Chrysler
set a high bar with only slightly less spectacular numbers last week.

GM has managed the challenges posed by Covid-19 particularly well, but in the latest quarter it was also helped by very unusual market conditions. Production stopped because of the lockdowns in the spring, depressing both inventory and costs. Then demand for vehicles, particularly pickup trucks, stormed back as consumers shunned public transportation and air travel. For the third quarter, the combination led to good sales and even better prices. 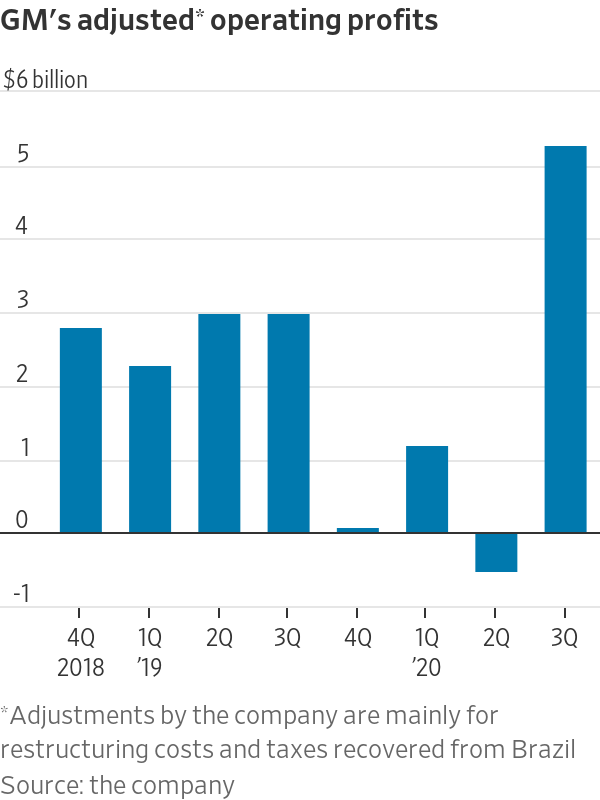 Profits will normalize in the current period as austerity measures unwind, yet revenue could remain strong. GM’s inventories on U.S. dealer lots at the end of September were only 11% above their trough at the end of June and well down from last year. It has a suite of new sport-utility vehicles. Cheap financing and the pandemic may well continue to offset any weakness from consumer caution at a time of high unemployment.

With GM stock back to its pre-Covid levels, though, none of this reassuring news is likely to change investors’ minds. To earn a better stock-market valuation, the largest U.S. auto maker needs to show returns on the billions of dollars it is plowing into electric vehicles.

A Democratic White House would help, particularly by working in concert with California, which sets its own rules. President Trump rolled back Obama-era emissions regulations this year, but California has only doubled down on the fight against climate change with last month’s move to ban combustion engines by 2035. Vehicle manufacturers would like to avoid dual-speed regulation at all costs.

However, difficult questions about the profitability and competitiveness of Detroit in the new technology won’t be answered for years. GM made a high-profile show of electric-vehicle strength with last month’s launch of the Hummer EV, and spent much of its call with analysts Thursday vaunting the new battery system that underpins it. The risk for the company—which highly valued electric-vehicle startups don’t face—is that such products undermine others in its lineup that earned it that 14.9% margin in the third quarter.

Until a clearer picture emerges of how the technological transition will pan out for Detroit, it is hard to see GM earning a core role in investor portfolios—however strong this year’s crisis management.

What Stays and What Goes in a Post-Covid-19 World

Investors Diurnal Team - November 11, 2020 0
Two critical unemployment programs are set to expire at the end of the year, potentially leaving millions of Americans vulnerable to eviction and hunger and threatening to short-circuit an economic recovery that has already lost momentum.As many as 13 million people are receiving payments under the programs, which Congress created last spring to expand and extend the regular unemployment system during the coronavirus pandemic. Leaders of both major parties have expressed support for renewing the programs in some form, but Congress has been unable to reach a deal to do so. It remains unclear how the results of Tuesday’s election will affect prospects for an agreement.That means that for now at least, people like Randy Williams must prepare for the possibility that they are weeks away from losing their only income.Mr. Williams, 56, lost his job as a manager at a Memphis-area Cracker Barrel in the first weeks of the pandemic. His state jobless benefits ran out last month, leaving him to rely on a 13-week extension under the federal Pandemic Emergency Unemployment Compensation program, which ends in late December.Already, Mr. Williams is struggling to get by on his $275 weekly benefit check, the maximum allowed in Tennessee. He has