ON JANUARY 7TH , a day after a mob of his supporters stormed the Capitol in Washington, leaving five people dead and America shaken, Donald Trump had the sixth-most-popular account on Twitter, with nearly 90m followers. A day later he had none. The outgoing president was permanently booted off his social-media platform of choice for inciting violence.

Free-speech advocates—including Angela Merkel, Germany’s chancellor and no Trump fan—bristled. So did investors. Twitter’s share price has fallen by around 10% since @RealDonaldTrump’s expulsion. That of Facebook, which suspended his account “indefinitely” on its main social network and Instagram, its sister photo-sharing app, has also dipped.

This looks like an over-reaction, at least by the stockmarket. Social-media firms’ ad-sales departments may be glad to be rid of the troll-in-chief. Before being displaced by “coronavirus” last year, “Trump” was the most blocked keyword by online advertisers, loth to have their logos appear alongside content that might repel customers.

Twitter’s algorithms prioritise tweets that generate greatest engagement. Mr Trump’s were highly engaging, to put it mildly, and often ended up at the top of users’ feeds. This coveted online real estate is sold through automated auctions. If many potential bidders block “Trump”, this may depress prices. With Mr Trump gone, says Mark Shmulik of Bernstein, a broker, this ad inventory becomes more valuable.

Twitter may experience a decline in engagement in the short term. People who came to the site to gawp at Mr Trump’s latest outrage, and stuck around to read about movies or sports (or some lesser dust-up) may not return with the same frequency. But the upside of being more brand-friendly may offset losses from the Trump dump. The share price of Snap, which also suspended the presidential account, jumped on the news. Twitter’s remains well above pre-Trump levels (see chart). 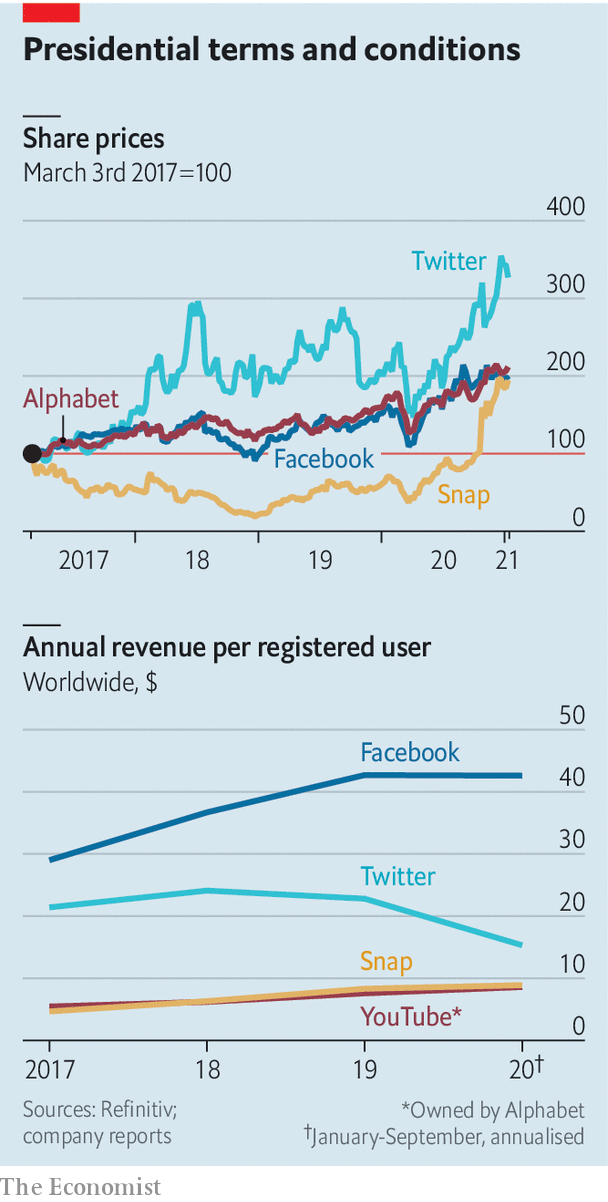 For Facebook, Instagram and YouTube, which blocked Mr Trump’s account on January 12th, the impact is probably going to be negligible. Their monthly users (2.6bn, 1bn and 2bn, respectively) are more numerous and more global than Twitter’s (300m).

A bigger concern is whether muting Mr Trump undermines social-media firms’ claim that they are impartial platforms, and thus shielded from liability for what their users post, rather than publishers, who do not enjoy such protections. That is why they have been careful to couch their decision in the language of process and consistency with their own rules.

Even before the latest outrage, the firms had been stepping up moderation efforts, without giving up claims to platformdom. They employ tens of thousands of moderators between them to wade through toxic posts and remove those that break their terms of service. They have tried to limit the spread of misinformation around elections and other febrile times. Facebook has a semi-independent oversight body to hear appeals to disputed moderation decisions.

The social-media giants may welcome clearer rules, the need for which enjoys bipartisan support in America. These would raise barriers to entry for upstart rivals; Parler, a newish social network popular among American right-wingers, was boycotted into oblivion when it showed itself unable, as well as unwilling, to excise dangerously inflammatory content (see article). If muting Mr Trump engenders greater regulatory clarity, the thinking goes, so much the better for deep-pocketed incumbents. As an added bonus, it earned them rare plaudits from Democrats, who are about to take unified control of the federal government. ■

It Could Be a Great Year, if Your Business Survives Winter

The FAA has given approval for commercial drones to fly over people. It means...

Record number of NYC eateries sign up for Restaurant Week

Pak govt to mortgage Islamabad's biggest park to get loan

Investors Diurnal Team - January 5, 2021 0
The Bitcoin boom may not be over yet. The price of the world’s largest cryptocurrency could eventually hit $146,000 if institutional investors keep adding it to their portfolios, JPMorgan Chase analysts reportedly predict. The megabank’s strategists said in a research note that Bitcoin is in for a long-term surge if it continues to give gold a run for its money as an “alternative” currency for investors, according to Bloomberg News. The price of a single Bitcoin would hit the $146,000 mark if the cryptocurrency’s total market value grows by 4.6 times to match the total private-sector investment in gold through bars, coins or exchange-traded funds, JPMorgan reportedly says. But such a long-term rise would depend on Bitcoin’s volatility converging with gold’s, which the bank doesn’t expect to happen any time soon, reports say. “A convergence in volatilities between bitcoin and gold is unlikely to happen quickly, and is in our mind a multiyear process,” JPMorgan strategists led by Nikolaos Panigirtzoglou wrote in their note, according to The Street. “This implies that the above $146,000 theoretical bitcoin price target should be considered as a long-term target, and thus an unsustainable price target for this year.” Bitcoin has swung wildly in recent
Business

Investors Diurnal Team - January 20, 2021 0
In a statement on Wednesday, WH Smith plc (LON: SMWH) said that trading during the Christmas period topped expectations. But Prime Minister Boris Johnson ordered another national lockdown in the first week of January to minimise the fast spread of the new variant of the flu-like virus that is likely to result in up to £20 million of monthly cash burn, the retailer added. WH Smith jumped more than 2% in premarket trading on Wednesday and gained another 5% in the next hour. Including the price action, the stock is now trading at £16.86 per share versus £7.0 per share in March 2020. The price action should come in handy if you’re interested in investing in the stock market. Are you looking for fast-news, hot-tips and market analysis? Sign-up for the Invezz newsletter, today. WH Smith values cash and available credit at £340 million The ongoing COVID-19 crisis has so far infected more than 3.4 million people in the United Kingdom and caused over 91 thousand deaths. In November and December, the Swindon-based company said on Wednesday, it generated cash that pushed its cash and available credit to £340 million – a position stronger than it had expected. The London-based company concluded 2020 with £90 million of liquidity. In December, its high street business recorded sales at 92% of the level seen in the same month last year, thanks to the retailer’s new work-from-home ranges coupled with the seasonal increase during the Christmas period. In separate news, the British multinational electrical and telecommunications retailer, Dixons Carphone plc said it will push the government to continue to allow “Click and Collect” services.   WH Smith’s overall sales stand at 59% of last year’s level WH Smith also said on Wednesday that its high street stores continued operations amidst the ongoing pandemic, strictly following the guidelines laid out by the government that sees newsagents as essential retailers. In the 20 weeks that concluded on 16th January, the retailer’s