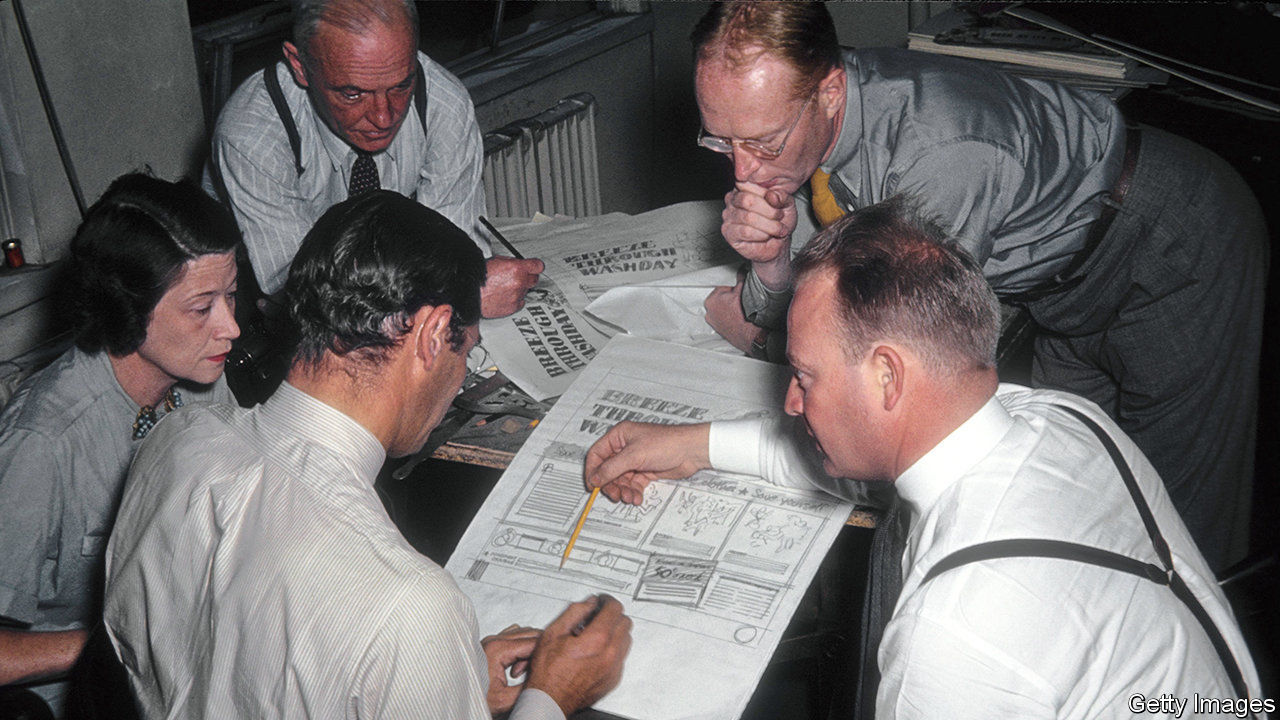 ONLINE SHOPPERS often feel they are being watched. Put an item in your basket but fail to buy it, and it may follow you plaintively around the internet for days. Announce your engagement on social media and you will be hit with ads for the honeymoon. As you turn 40, expect the attention of elasticated-trouser merchants.

On April 26th Apple, which supplies one-fifth of the world’s smartphones and around half of America’s, introduced a software update that will end much of this snooping. Its latest mobile operating system forces apps to ask users if they want to be tracked. Many will decline. It is the latest move forcing marketers to rethink how they target online ads.

By micro-profiling audiences and monitoring their behaviour, digital ad platforms claim to solve advertisers’ age-old quandary of not knowing which half of their budget is being wasted. In the past decade digital ads have gone from less than 20% of the global ad market to more than 60%, according to GroupM, the world’s largest media buyer. Even last year, amid the pandemic, the business grew by 9%. As lockdowns ease it is going gangbusters. On April 27th Alphabet, Google’s parent company and the world’s biggest digital ad platform, reported first-quarter ad revenues up by 34%, year-on-year. The next day Facebook, the second-largest, said its own ad revenues had grown by 46%.

Stronger privacy protections may make their ads less effective. In 2018 the EU imposed its General Data Protection Regulation (GDPR) and America’s most-populous state introduced the California Consumer Privacy Act. Both made it harder to harvest users’ data. Apple’s Safari web browser has blocked the “cookies” that advertisers use to see what people get up to online since 2020. Google has similar plans for its more popular Chrome browser.

Apple’s latest change makes explicit an option that was previously hidden deep in its phones’ settings. Users can forbid apps to access their “identifier for advertisers” (IDFA) code, which singles out their device, and from tracking their activity across other firms’ apps and websites. It amounts to a “seismic shift” in in-app advertising, says Jon Mew, head of the Internet Advertising Bureau, an industry body

The platforms best-placed to survive the shake-out are those with lots of consumer data of their own. Google’s $147bn ad business gets most of the information it needs from the terms users type into its search bar. Amazon, whose digital-ad business is the third-largest and growing fast, has the advantage of being able to track what people buy after seeing ads on its site—a “closed loop”, as marketers call it. Apple knows where iPhone-users go, what time they wake up and much besides. It has a small but growing ad business, selling prominence in its app store, for instance.

For Facebook, which knows more about its users’ interests than about their shopping needs, Apple’s changes are more worrying. In August it warned they might reduce revenues at its Audience Network, through which it sells ads to other apps, by as much as 50%. But the Audience Network represents less than a tenth of its business. Thanks to its deep knowledge of users, it will still be better at targeting than almost anyone else. “In a world with a lot less data, who has relatively more?” asks Brian Wieser of GroupM. The effect of GDPR was, if anything, to increase Facebook’s and Google’s market shares, he adds.

To improve its tracking of purchases, Facebook is moving to create a closed loop of its own. Last year it introduced Facebook Shops on its flagship social network and Instagram Shops and ts sister photo-sharing app. Mark Zuckerberg, Facebook’s boss, speculated in March that “we may even be in a stronger position if Apple’s changes encourage more businesses to conduct more commerce on our platforms, by making it harder for them to use their data…outside of our platforms”.

Not every ad platform will be able to adapt as easily. Smaller publishers with fewer data and resources will suffer, believes Nicole Perrin of eMarketer, a research firm. Publishers that rely on third-party cookies will be hit hardest. The day Apple launched its new policy, a group of German publishing companies lodged a legal complaint with Germany’s antitrust authorities. Small platforms may also find it harder to persuade phone users to trust them with their data. AppsFlyer, an ad-tech company, found that iPhone users agreed to tracking from shopping and finance apps more than 40% of the time, but 12% of the time with casual gaming apps.

The inability to share data is forcing advertisers to come up with new ruses. One is to bypass rules banning data transfers between ad-tech companies by consolidating. In February AppLovin, a mobile-software company, acquired Adjust, which provides mobile-ad attribution, reportedly for $1bn. Another is to ask users to “sign in”, which lets an app monitor their behaviour with no need for IDFAs. And instead of targeting individuals, marketers can target broader interest groups—coffee lovers, Daily Mail readers, and so on—much as they did in the pre-internet age. It’s “back to the future”, says Mr Wieser.

In another throwback, advertisers will have to resort to old-school techniques for gauging ads’ effectiveness, such as looking for a rise in sales in a region where an ad ran but not elsewhere. That will favour campaigns which promote general awareness of a company’s brand; effects of so-called direct-response ads, which require consumers to take an action (like clicking), would be too small to measure. Platforms that mostly attract brand advertising will thus benefit. Snap, whose social network popular among teenagers belongs to that group, posted a year-on-year rise in revenues of 66% in the first quarter.

The less advertisers know about their audience, the costlier advertising will become. Facebook has argued this will hurt small businesses. It is probably right, thinks William Merchan of Pathmatics, a data company. Digital ads promise to cut waste in media buys, he says. Now that ad firms are again in the dark about which half of their budget is wasted, they are “going to have to just spend more”.

Why the housing market may see an end-of-September shock

Where home prices are going next, according to forecast models

Twitter still can’t get enough of this insane TD pass from...

Scamwatch: What to look out for when online shopping | Bendigo...

Investors Diurnal Team - June 18, 2021 0
community, Every year, thousands of Australians are targeted by scams, whether it be online, via phone, mail or even in person. Australian Community Media...
Business

Tesla’s bitcoin gambit gave it a $100M boost in the first...

Investors Diurnal Team - April 27, 2021 0
Tesla’s foray into the cryptocurrency market made it quite a bit of coin, the company announced. The electric carmaker’s first-quarter earnings released late Monday revealed that it sold some of the $1.5 billion worth of bitcoin that it purchased in February, giving the company a $101 million bump in profit. That’s no small lump of cash, considering it makes up nearly one-fourth of the company’s $438 million in profit, Tesla’s biggest ever. On a conference call with analysts, Chief Financial Officer Zach Kirkhorn elaborated on the company’s interest in the cryptocurrency and said Tesla intends to hold the digital token over the long-term, despite its recent sale. The company still has about $1.3 million in bitcoin.  “Elon and I were looking for a place to store cash that wasn’t being immediately used, trying to get some level of return on this, but also preserve liquidity,” said Kirkhorn, who was officially appointed Tesla’s “master of coin” last month. Elon Musk has been credited with increasing the prices of cryptocurrencies via Twitter.Hannibal Hanschke via AP “Bitcoin seemed at the time, and so far has proven to be, a good decision — a good place to place some of our cash that’s not immediately being used,”
Business