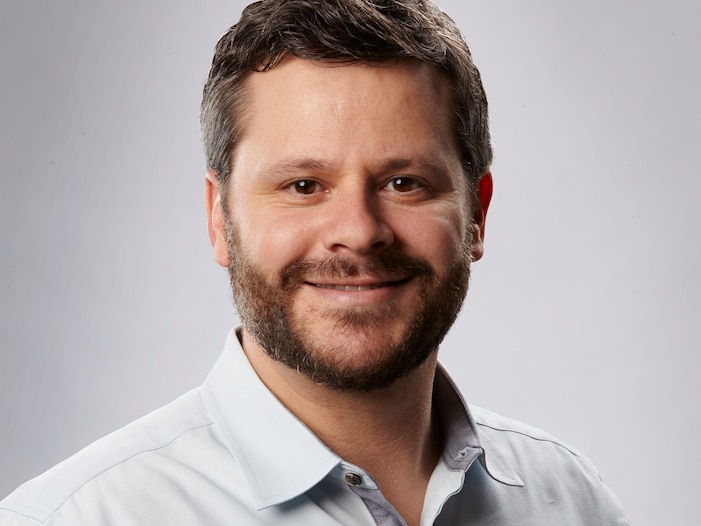 In late October 2020, Wonderful Pistachios announced that annual North America retail sales had surpassed $1 billion for the first time. It was the first brand in The Wonderful Company’s portfolio, which also includes Wonderful Halos mandarins and POM Wonderful pomegranates, to achieve this.

The brand has seen huge gains since it launched in 2008. According to analytics company IRI, Wonderful Pistachios No Shells is currently America’s fast-growing snack brand and is driving double-digit growth.

But building a brand around a product unfamiliar to many Americans was never a slam dunk. Pistachios had never experienced sustained and successful marketing – they were considered a commodity crop and sold mostly in bulk like produce. Nuts in general were seen as too high in fat and lacking the high-impact flavor of other salty snacks. Promotion and sales might pick up around the holiday baking season or big sporting events, but they were largely ignored. 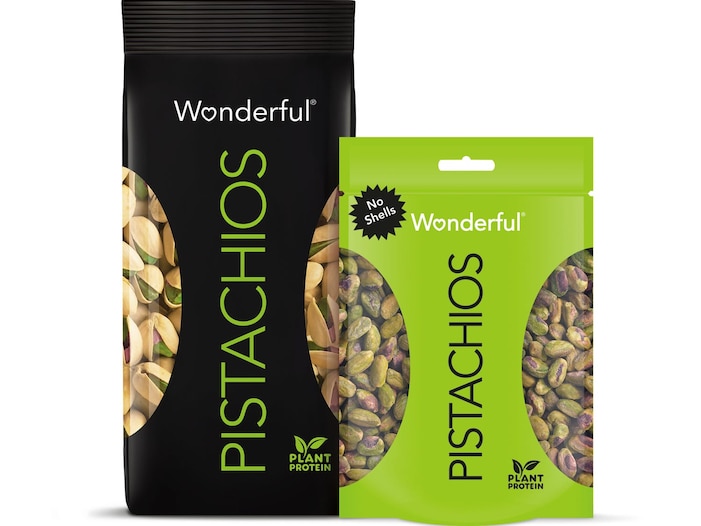 “When we first launched the brand, we wanted to disrupt the pistachio category, then the nut and salty snack category,” said Adam Cooper, senior vice president of marketing. The company did this first with the in-shell nuts people were accustomed to. Later, Cooper said, “We actually challenged the status quo and disrupted ourselves when we decided to do two varieties of Wonderful Pistachios: No Shell and In Shell.”

Creating its own competitor was a risky move, but it paid off. While the No Shell line accounts for $350 million of the $1 billion in brand sales, the In Shell product remains the driver of growth.

Cooper shared how the company pulled off a notable success.

“One of our company’s values is to play to win,” Cooper said. “Sometimes companies play to not lose.” Wonderful never intended to just enter the pistachio category; it set out to disrupt and dominate it. According to the company, the brand now has 70% market share for pistachios in the US.

“You empower the team, you embrace dissent, and you dedicate resources to things you think are going to have a big impact,” Cooper said. “We have a culture of continuous improvement. We always want to find opportunities to try new things. Sometimes they work, something they don’t work. But when they work, we go big and jump on it.”

Cooper is clear with his staff that sometimes things are going to be hard and they’re going to have to find the silver lining. The COVID-19 pandemic is one example of how the team successfully dealt with an “oppor-threat,” as he calls them.

“This has been a challenging time for lots of people, but we were well-positioned at the beginning because consumers were starting to look for foods that were healthy and helped them with their immunity,” Cooper said. “We were fortunate to have foods that were rich in antioxidants and rich in Vitamin C. We saw that and capitalized on it.”

In the last decade, the company has invested more than $1 billion in marketing Wonderful Pistachios, Wonderful Halos, and POM Wonderful, positioning itself as a leader in the healthy snack and beverage space. It’s also invested in the produce ecommerce space, which proved quite beneficial at the beginning of the pandemic when more consumers transitioned to shopping for food online.

Do a few things very well

At Wonderful, the goal is always to do a few things really well.

“As important as saying yes to business initiatives and new opportunities is knowing when to say no,” Cooper said. “We take a very disciplined approach to evaluate new opportunities with the most important criteria being alignment with our company’s mission of making the world a better and healthier place, which we are not willing to sacrifice for a profit.”

One of the things that allows this to happen is “being vertically integrated from the seed to the shelf,” Cooper said. Controlling how its food is grown and processed gives it great influence over the quality of the end product. The company’s in-house advertising agency, sales and merchandising group, and research team allow it to recognize and capitalize on trends very quickly.

“When we’re looking at something new, we ask ourselves, does it have a unique selling proposition that will make people healthier?” Cooper said. “Will it make a difference? Can we build a brand around it?”

Like most nuts (Planters peanuts being the notable exception), pistachios had no identity or brand association before 2008.

“With pistachios and other brands, we really do build these uncompromising and iconic brands, and we do it with humor,” Cooper said.

The first No Shell ads used the edgy tagline “Sometimes, Naked is Better.” It showed famous nude statues, such as Venus de Milo, wearing clothing and shopping for the disrobed nuts. As the plant-based food trend has taken off, Wonderful has focused on the slogan “Plant protein from pistachios: It’s the next big thing.”

“Our latest ad has (former NFL tight end) Tony Gonzales, who is famous for advocating for a plant-based diet,” Cooper said.

The Wonderful Pistachios brand started small, but when the company was ready to go big, it turned its attention to thought leaders. “Plant protein was this emergent trend,” Cooper said, “and it was more focused on a small population,” including people eating vegan, vegetarian, or flexitarian. “We wanted to talk to leaders in that space who were driving that conversation, which was the dietitians and scientists.”

In April 2019, the company hosted the first Plant-Based Nutrition Leadership Symposium in Los Angeles. “The two-day event was a total immersion into plant-based nutrition science, culinary applications, and leadership dialogue, and of course, to celebrate pistachios in a plant-based context,” Cooper said. Sessions were led by experts from universities and other organizations and covered topics such as protein quality, pediatric nutrition, sustainable nutrition, and sports nutrition.

Information shared by experts from events like this have helped consumers see pistachios as not just fun but part of a healthy lifestyle, which has been a winning combination for Wonderful and helped it achieve its first – but perhaps not last – billion-dollar milestone.

Building an API in 60 seconds, without any server setup

How to get noticed by Netflix job recruiters who can help...

Stock Alert: Aptorum Up 30% On Clearance To Initiate Phase 1...

Investors Diurnal Team - January 15, 2021 0
"Shark Tank"/ABC"Shark Tank" investor Kevin O'Leary criticized Bitcoin as niche, illiquid, and poorly regulated. "Bitcoin is still a nothingburger, a giant nothingburger," he said on his YouTube channel. O'Leary emphasized the potential for a global digital currency approved by regulators. Visit Business Insider's homepage for more stories. "Shark Tank" star Kevin O'Leary dismissed Bitcoin as too niche, illiquid, and badly regulated to justify a substantial investment in an interview this week. "I look at the asset value of Bitcoin versus the asset value of all things traded and Bitcoin is still a nothingburger, a giant nothingburger," he told investor Anthony Pompliano in a video on his YouTube channel. "You don't have every institution willing to play ball with it," the O'Leary Funds and O'Leary Ventures chairman continued. Read more: 'Vastly technically disconnected': A market strategist breaks down the 3 indicators that show Tesla is overpriced - and what to look for that could signal a crash resembling Cisco's in 2000 O'Leary - whose nickname is "Mr. Wonderful" - added that it's a headache to buy a large sum of Bitcoin and a pain to navigate the regulatory minefield around cryptocurrencies. "If I want to buy a million dollars' worth of Bitcoin right now, I've gotta do a fair amount of work to pull that off," he said. "I can't get consistency with any single regulator on endorsing bitcoin for me to actually do a significant transaction." However, O'Leary underscored the rich potential for a digital currency that is widely approved by regulators and can be used to buy assets around the world. Read more: Cathie Wood's ARK Invest runs 5 active ETFs that more than doubled in 2020. She and her analysts share their 2021 outlooks on the economy, bitcoin, and Tesla. "Then you would have something of tremendous value," he said. "That is a vision that's really attractive versus this tiny little thing." O'Leary voiced similar criticisms in a CNBC interview last month. The size of the Bitcoin market makes it "completely irrelevant to the institutional client," he said. The veteran investor also highlighted a regulatory crackdown as a major risk for crypto fans. "Grown men are going to weep when that happens," he said. "It will be brutal." Read more: How the boom in sustainable investing is influencing the way massive companies react to events like the Capitol riots O'Leary proposed a solution to his concerns on "The Pomp Podcast" last month: a cryptocurrency ETF approved by regulators. "Give me the top seven cryptocurrencies, put them into an ETF wrapper, and let me invest in it with liquidity, so that if I want to buy a million dollars of it in the morning and sell a million dollars in the afternoon, I can do that in an ETF format," he said.
features

Harley-Davidson shares remain in a bull market but the correction could...

Investors Diurnal Team - January 17, 2021 0
Harley-Davidson (NYSE: HOG)shares have been moving in an uptrend for a while, and according to the analysts, the correction could be around the corner. Morgan Stanley has downgraded its price target to $38 on Harley-Davidson, while UBS reported that the company faces concerns about how to increase sales in 2021. Fundamental analysis: There are certainly better long-term investment opportunities at the moment Harley-Davidson is an American motorcycle manufacturer founded in 1903 that has survived numerous ownership arrangements, periods of poor economic health, and intense competition. Harley-Davidson is one of two major American motorcycle manufacturers that survived the Great Depression, and the company has become one of the world’s largest motorcycle manufacturers. Harley-Davidson shares have advanced from $25 above $41 since the beginning of October, and the current price stands around $40. Harley-Davidson reported Q3 results in October; total revenue has decreased by 9.9% Y/Y to $964M while Q3 GAAP EPS was $0.78 (beats by $0.57). Total revenue has decreased below the expectations, and the company declared a $0.02/quarterly share dividend, which is in line with previous. Despite this, Morgan Stanley has downgraded its price target to $38 on Harley-Davidson and assigned an equal-weight rating from overweight. “Harley delivered a
Markets