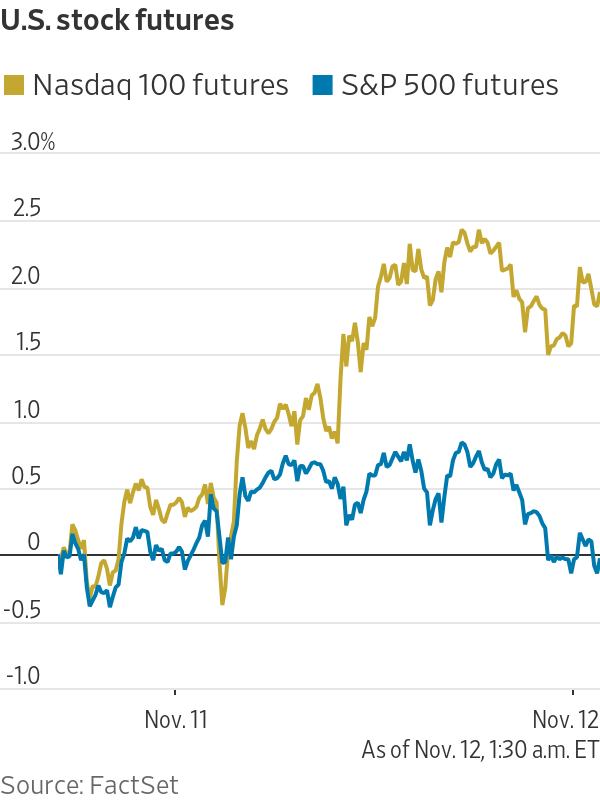 Here’s what we are watching as markets kick into gear Thursday.

—Stock futures slipped as new restrictions to curb the spread of coronavirus sparked concerns about further damage to the economy. Futures tied to the S&P 500 fell 0.3%, pointing to a decline in the gauge after the opening bell. Read our full market wrap here.

—What’s coming up. Initial jobless claims, a proxy for layoffs, will be released by the Labor Department at 8:30 a.m. ET, with economists surveyed by The Wall Street Journal predicting new applications for unemployment benefits likely remained steady at high levels last week. October consumer prices are due at 8:30 a.m.
Palantir Technologies,
Walt Disney
and
Cisco Systems
will report earnings this afternoon.

—Moderna climbed 3% in offhours trading after the biotech company said the first batch of data from its late-stage test of an experimental Covid-19 vaccine candidate was ready for analysis.

—Boeing Company dropped 2.7% out of hours after the company said it expects a weaker global market amid the coronavirus pandemic, despite also releasing strong forecasts for China’s aircraft demand.

—Bitcoin briefly surged over $16,000 for the first time since 2018 before peeling back.

—
Hillenbrand
surged 5.4% ahead of the bell, after diversified industrial company swung to a loss in its latest quarter as expenses grew, but sales surged due to its acquisition of Milacron Holdings.

—
Sundial Growers
plunged around 9% premarket after the cannabis company reported a drop in third-quarter revenue that disappointed investors.

—
XPeng
‘s U.S.-listed shares surged over 7% offhours, as the China-based electric vehicle maker reported a more than fourfold jump in third-quarter revenue that beat analysts’ predictions despite posting an overall loss. Other U.S.-listed Chinese tech firms were also climbing, including JD.com and Pinduoduo.

—
Burlington Stores
climbed 3.8% before the bell, after Gordon Haskett said the company’s share price would rise to $262. Burlington closed Wednesday at $221.51.

Must Reads Since You Went To Bed

Pfizer’s Vaccine Is a Pick-Me-Up for Value Stocks

CFOs Watch for a Possible Minimum Wage Hike Under Biden

Lyft, Datadog, fuboTV: What to Watch When the Stock Market Opens Today