Restaurant chain Ruby Tuesday filed for bankruptcy after closing one-third of its locations this year.

It filed for Chapter 11 bankruptcy on October 7 in the U.S. Bankruptcy Court for the District of Delaware after a troubled year was worsened by the coronavirus pandemic. Stay at home orders and capacity restrictions hit Ruby Tuesday and other casual chains hard, many of which were already struggling. At least nine other chains have also filed for bankruptcy this year, including California Pizza Kitchen and the US arm of Le Pain Quotidien.

CEO Shawn Lederman said that this is not the end of Ruby Tuesday, but instead “an opportunity to reposition the company for long-term stability.”

Here’s how the chain went from a single restaurant in Knoxville, Tennessee where it is today.

The first Ruby Tuesday was opened by 21 year old Sandy Beall in 1972, right next to the University of Tennessee in Knoxville, where he was a student.

As a student, Beall managed three Pizza Hut franchises. When the owner had a heart attack, he sold the restaurants and gave Beall $10,000 in Pizza Hut stock, telling him to start his own business

A Pizza Hut location, which is owned by Yum Brands Inc, is pictured ahead of their company results in Pasadena, California, U.S., July 11, 2016.

The first restaurant, now closed, was a “burger and beer joint” according to the New York Times. 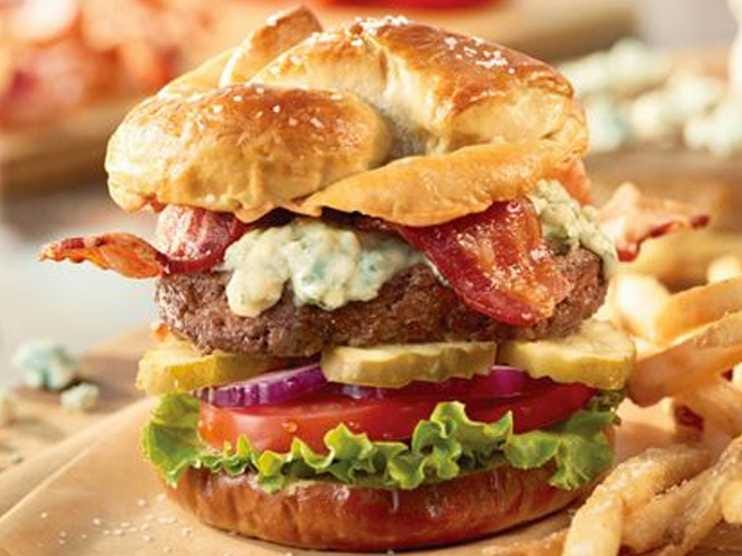 A fraternity brother and investor suggested the name Ruby Tuesday, after the Rolling Stones song. 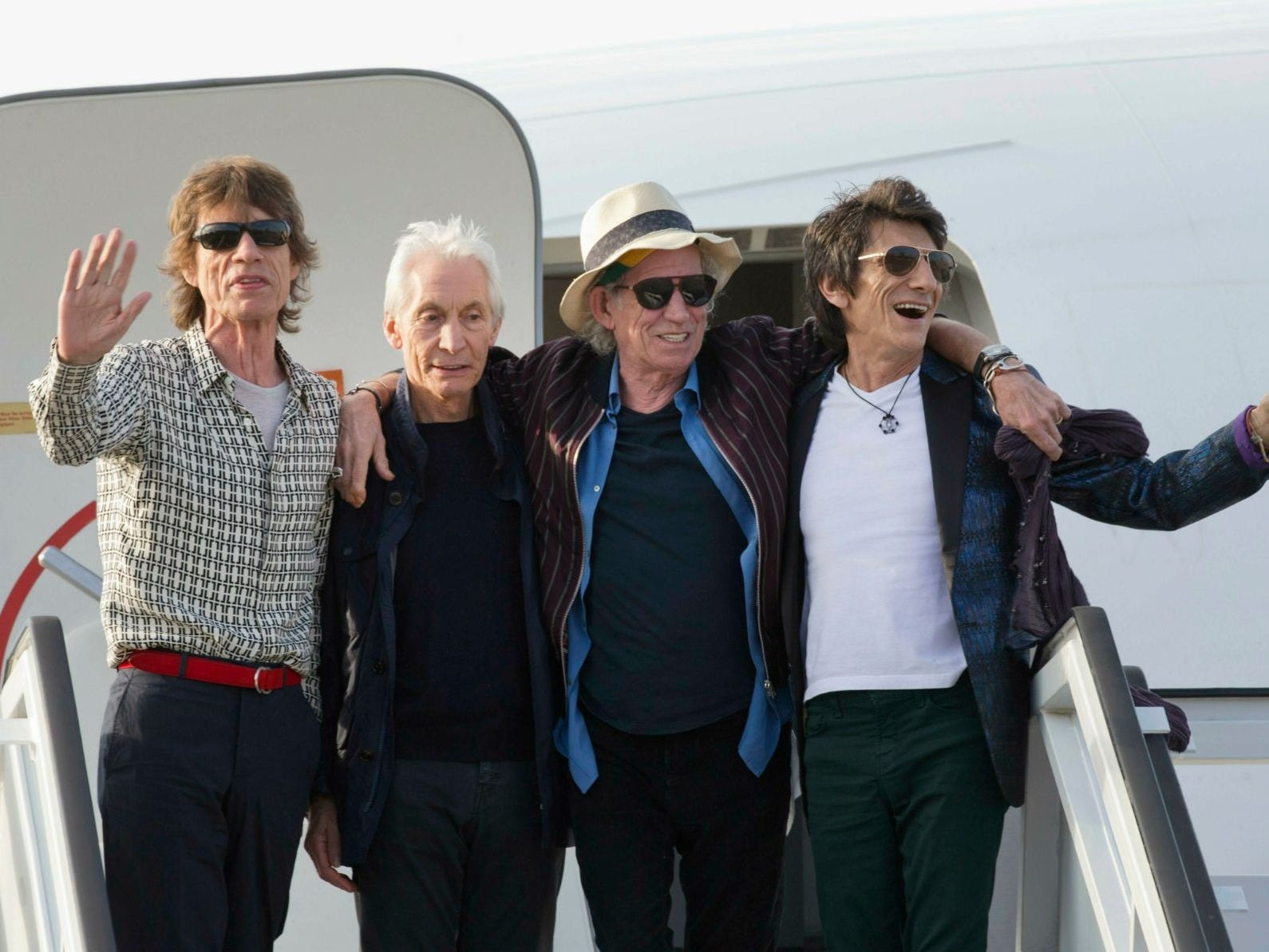 In this March 24, 2016 file photo, members of The Rolling Stones, from left, Mick Jagger, Charlie Watts, Keith Richards and Ron Wood pose for photos from their plane at Jose Marti international airport in Havana, Cuba.

Over the first few years, Beall opened restaurants at a rate of one every nine months. 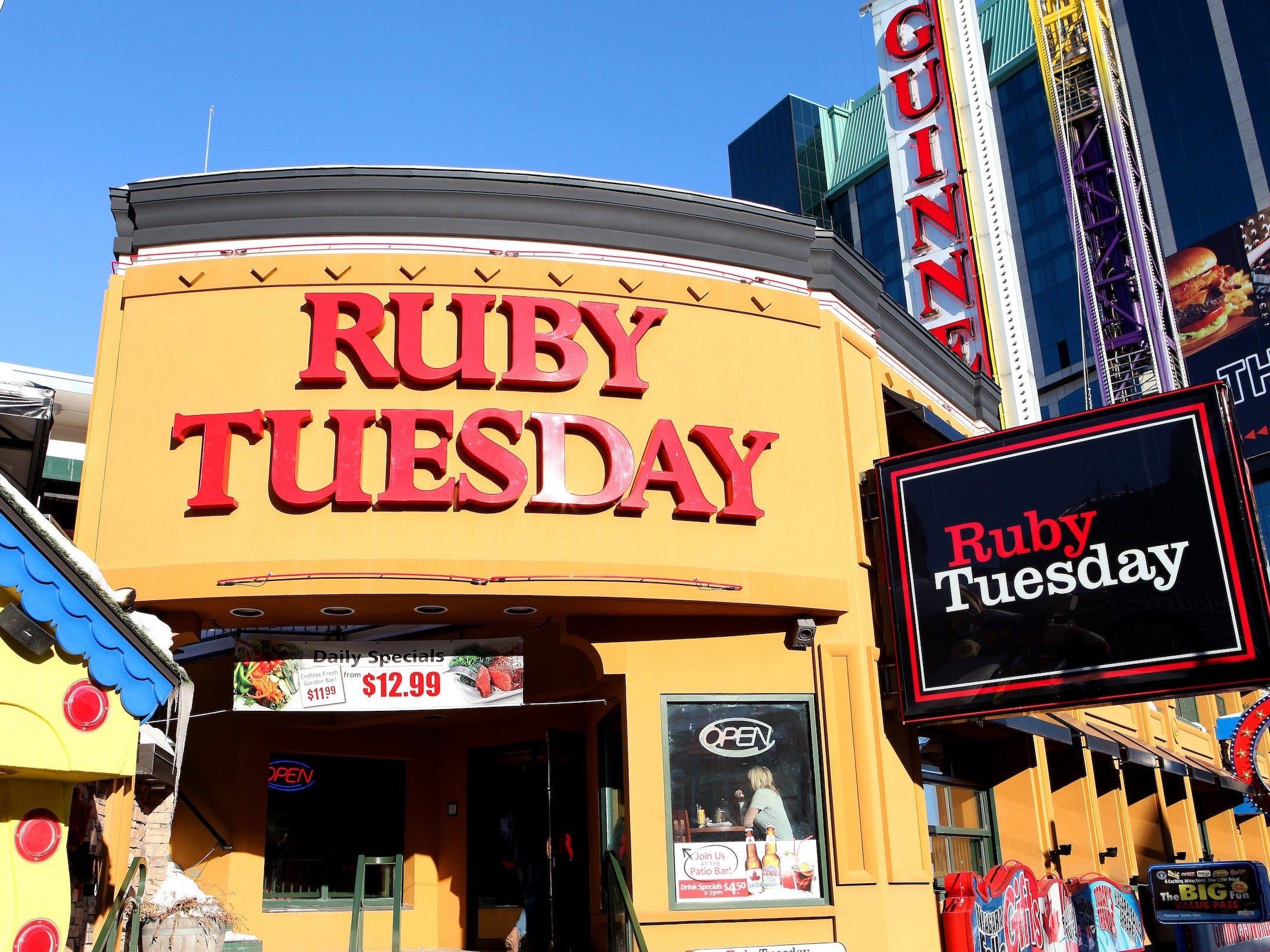 In 1982, Beall sold the chain to Morrison Restaurants Inc, a cafeteria and food service chain, for $15 million, and remained in charge.

Ruby Tuesday had more than 300 units by 1996, when parent company Morrison Restaurants Inc. split into three separate entities, one of which was Ruby Tuesday Inc, still headed by Beall.

In 2000, Ruby Tuesday Inc sold all of the other restaurant chains under the brand, leaving room to focus on building more Ruby Tuesdays. 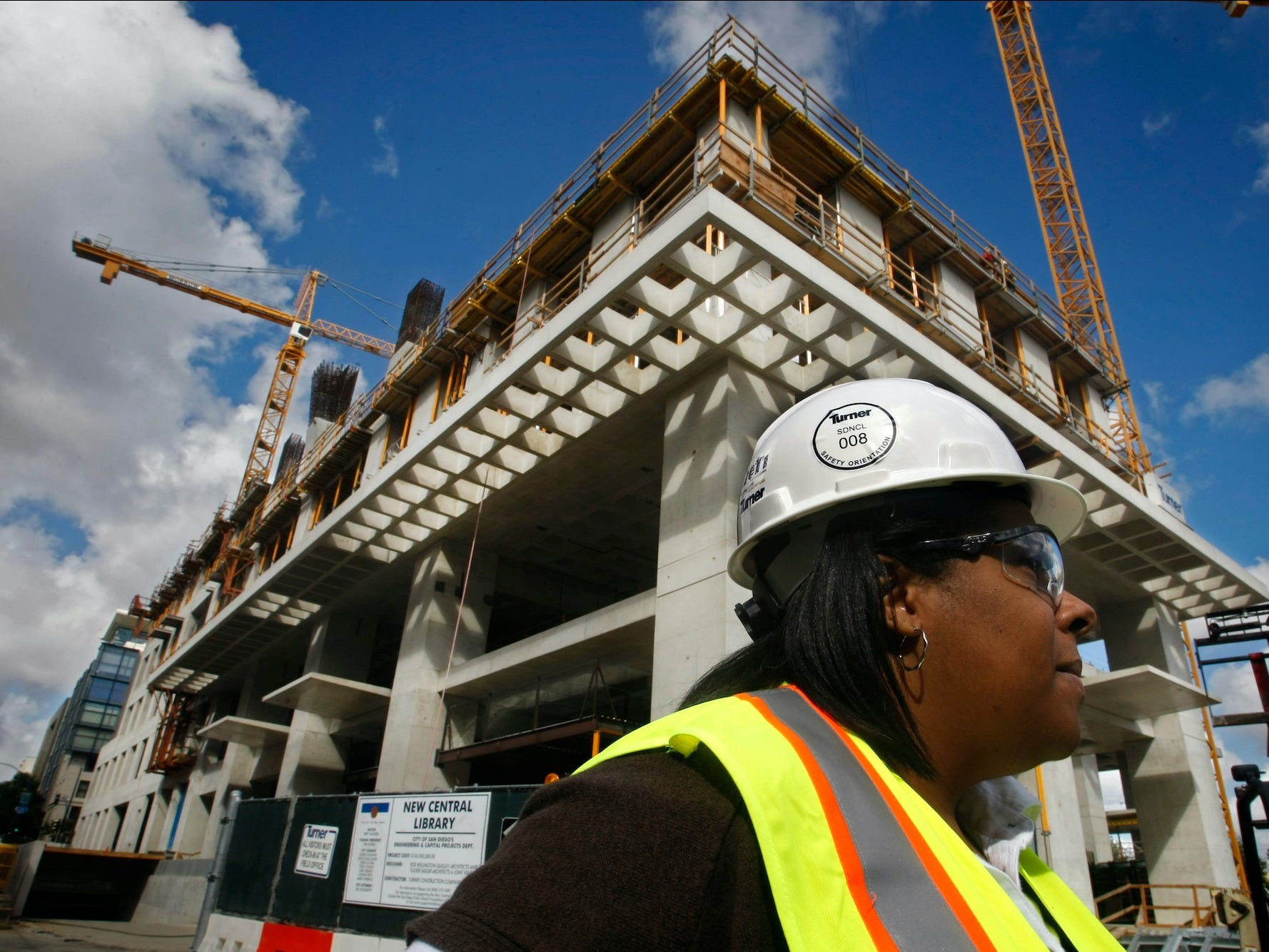 By the time it turned 30 in 2002, Ruby Tuesday was the seventh largest casual dining restaurant chain in the US. Despite spending little on advertising it was competing with big names like Red Lobster and Outback Steakhouse. 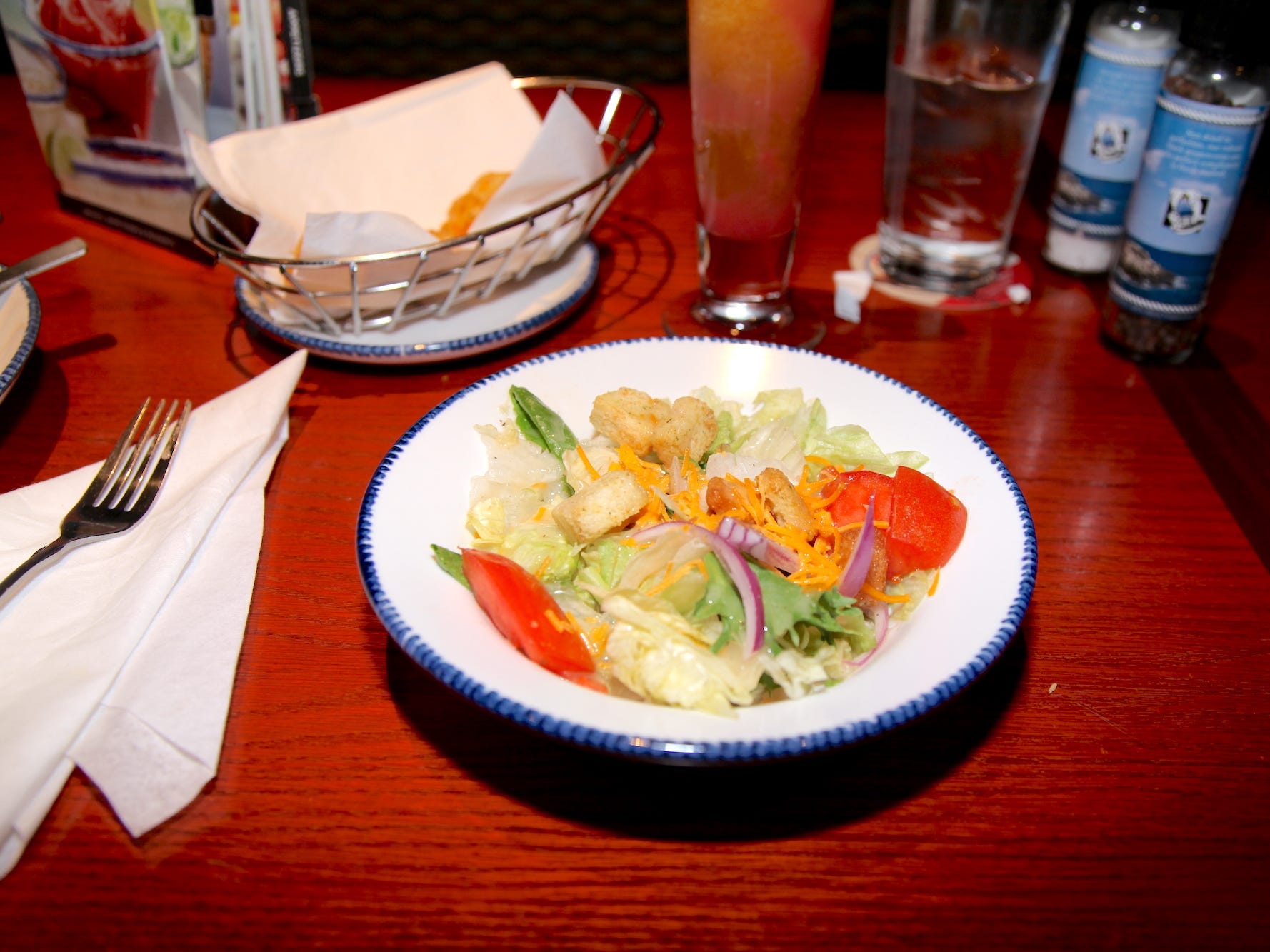 At that point, Ruby Tuesday specialized in large portions for inexpensive meals with a strategy of “We Feed America for Under $10.” In 2001, the average lunch check was $9, and the average dinner bill was $12. 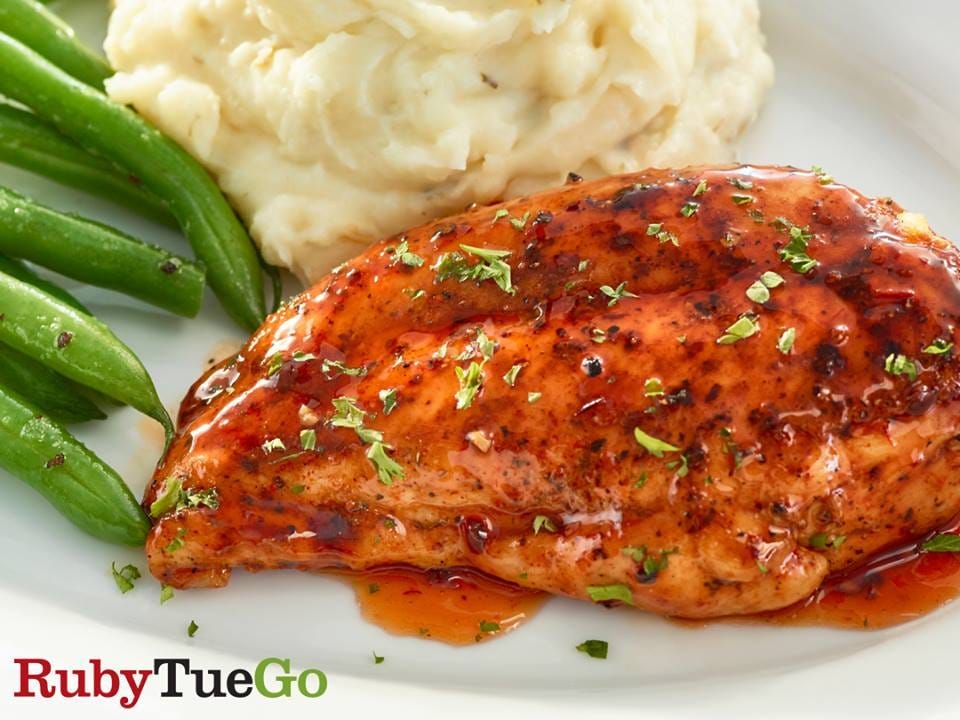 In 2007, just before the recession, Ruby Tuesday underwent a total redesign to a more upscale look, away from “roller skates on the wall and the bad food,” Beall said. By 2009, the company had spent more than $100 million on the upgrades, including serving higher end food and offering a wider wine selection. 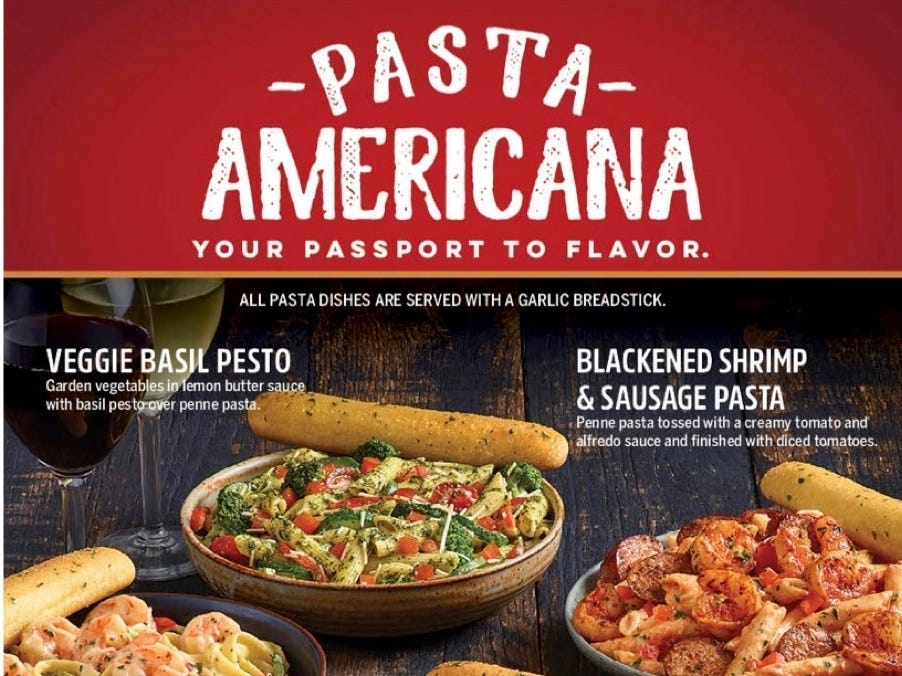 Ruby Tuesday had the misfortune of attempting to upgrade into a more formal and expensive dining experience just as the recession hit stores across the board, and competitors fought to offer the best deals. In 2008, the chain closed more than 50 locations. 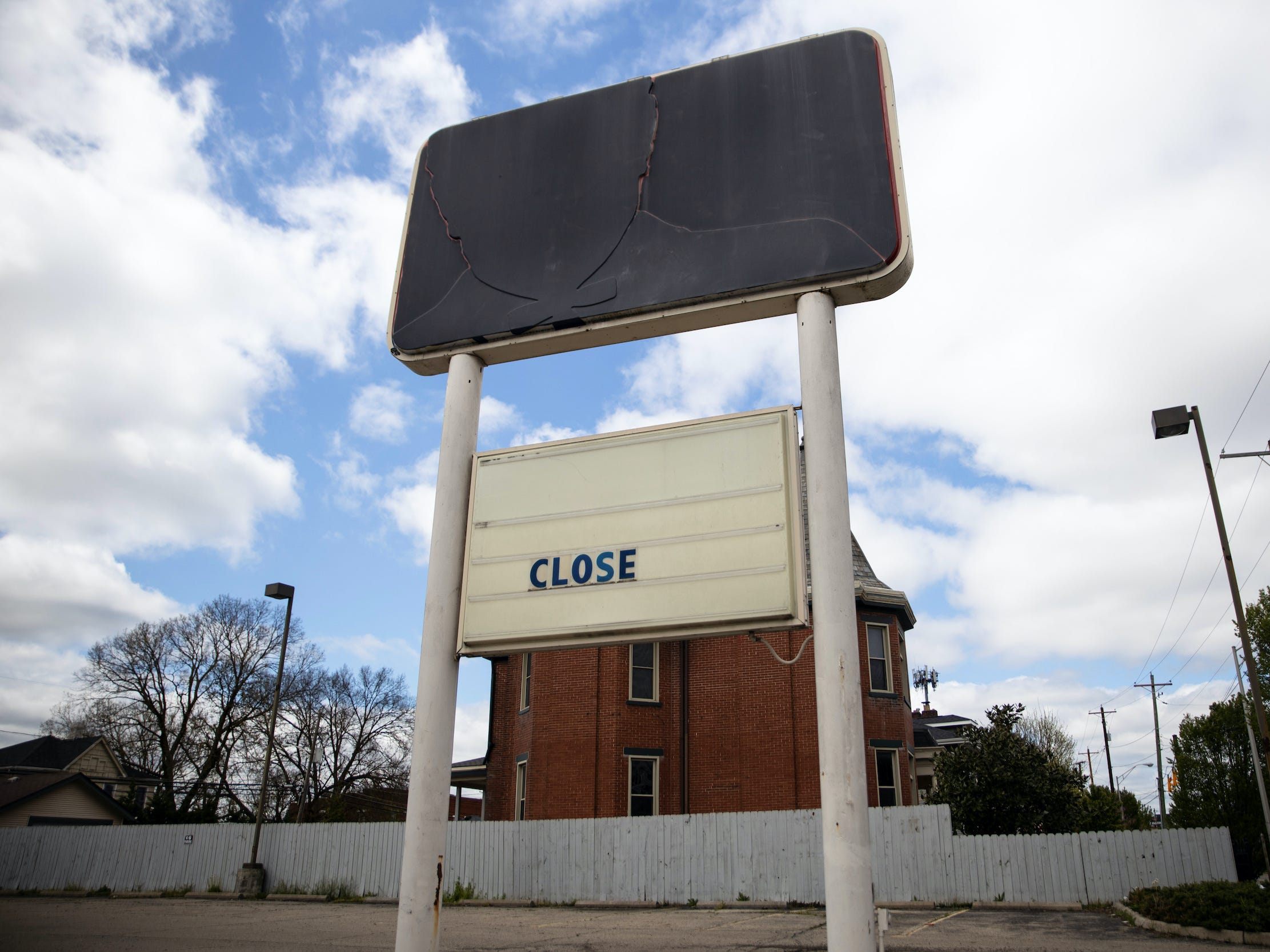 A close sign is seen in the parking lot of a closed business as Ohio implements phase one of reopening dentists, veterinarians and elective surgeries in Columbus, Ohio.

In 2012, Ruby Tuesday had 896 restaurants and 43,000 employees, with stock prices slowly rising, it looked like a potential comeback. That year, Beall stepped down. 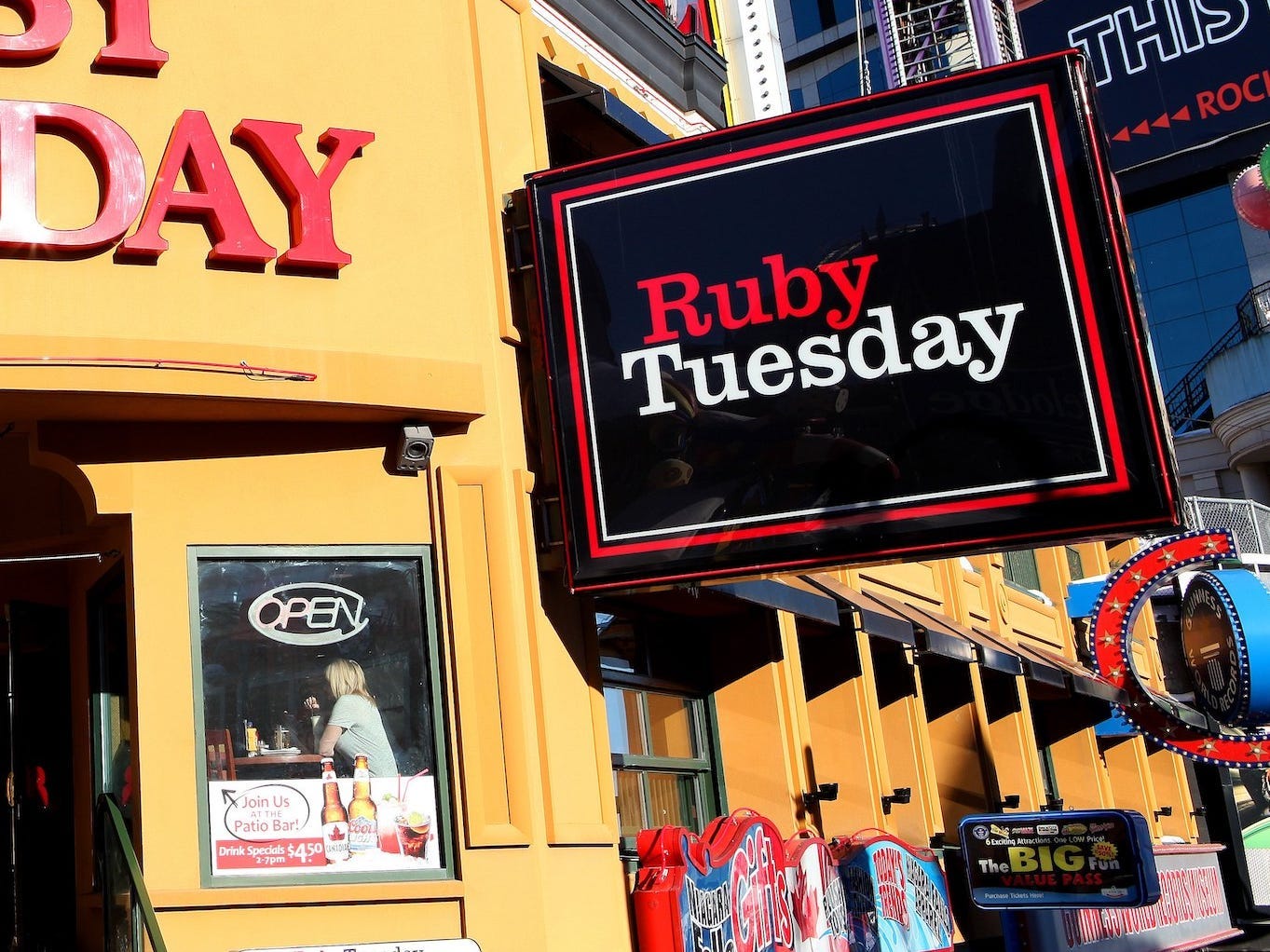 Then in 2020, Ruby Tuesday was not spared by COVID-19 and lockdowns.

In August, Business Insider reported that Ruby Tuesday had closed more than one-third of its restaurants, leaving a total 298 still open. Reporter Irene Jiang noted that the chain’s prospects didn’t look good even before the pandemic, going through five CEOs in five years. 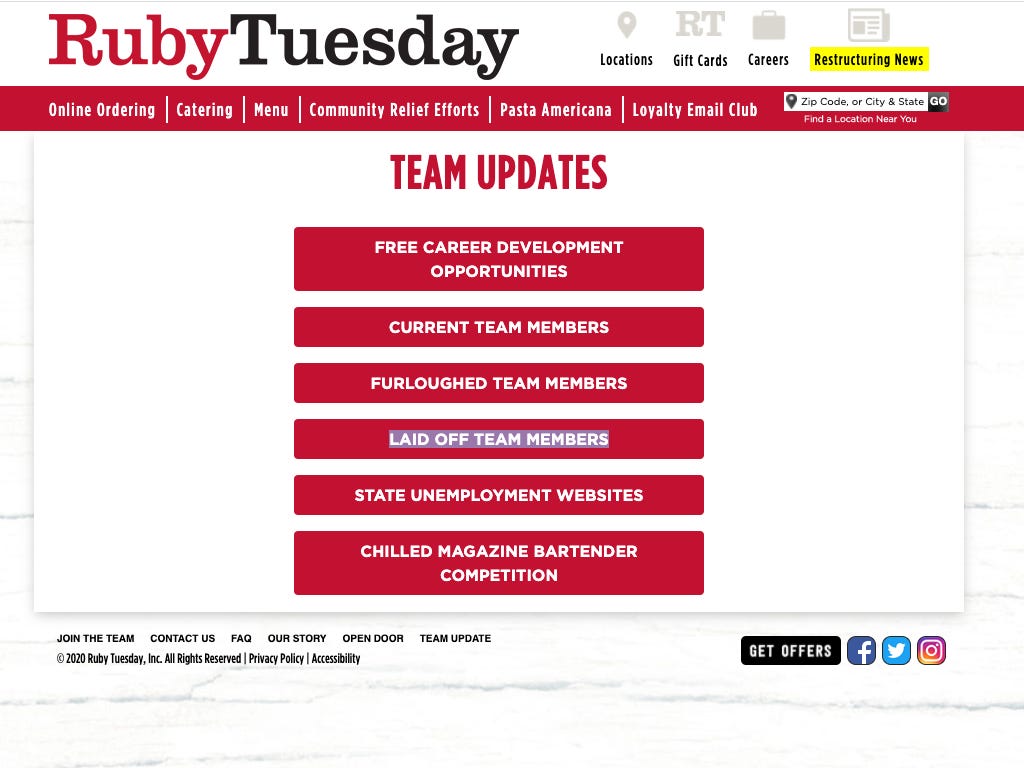 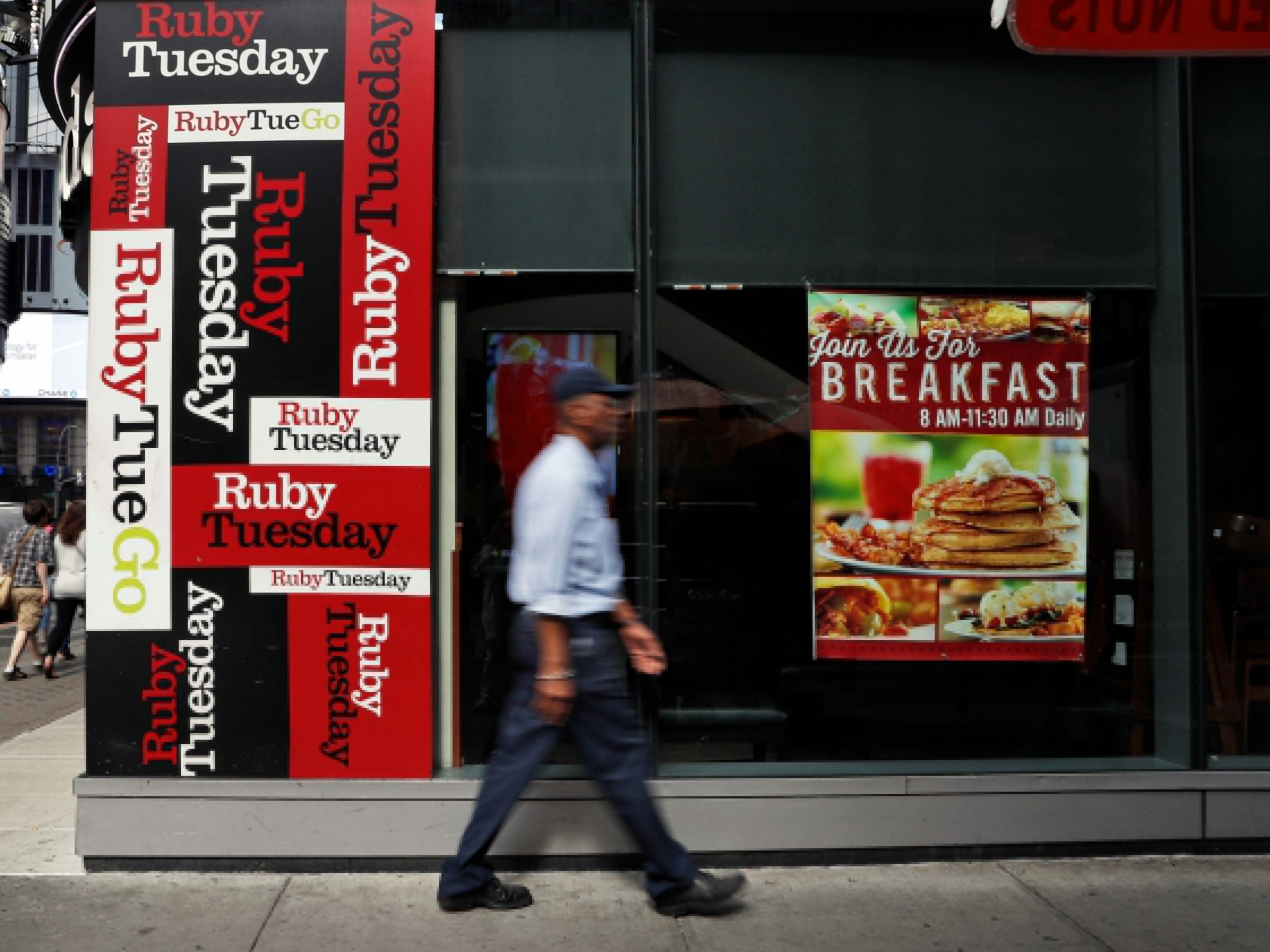 On October 7, the chain announced it had filed for bankruptcy. Ruby Tuesday says it will continue business as usual, though the filing said that more closures could be coming soon.

The Xbox Mini Fridge Is a Meme Turned into Reality

Credits and loans – What can we trust? – The Portugal News

UK PM Johnson Has Been Given Report into Lockdown Parties: Cabinet...

We Hired Celebrities As We Are New To Many Markets: Kartikeya...

Investors Diurnal Team - April 30, 2021 0
NANJING, China, April 29, 2021 /PRNewswire/ -- Suning.com, a listed and Fortune Global 500 Company owned by Suning Group ("Suning"), one of the leading commercial enterprises in China, officially released the 2020 Suning.com CSR Report on April 23. Having published the report since 2009, this 13th edition discloses the company's new ideas and achievements in CSR, covering smart retail core capabilities, partner empowerment, products and services, employee care and development, targeted poverty alleviation and rural revitalization, public welfare, and environmental protection.In a July 2020 assessment of the company's environmental, social, and governance (ESG) performance by the American investment research firm MSCI, Suning.com achieved a ranking of AA, exceeding the performance of 85% of the evaluated global companies. Suning repositions as a retail services provider and empowers partnersAs Suning.com transforms from retailer to retail services provider, it is consolidating its smart retail infrastructure to create an open platform that empowers partners, prioritizes strategic cooperation and government-enterprise collaboration, and enables the industry at large to create greater value for society. In 2020, given the uncertainties surrounding the pandemic and offline economic recovery, the consumer-to-manufacturer (C2M) model has emerged as an important avenue for traditional enterprises to break through and survive. Drawing on the company's full-scenario resources, massive user base, and rich data, the Suning Retail Cloud – Suning.com's rural retail business arm – inaugurated its "first class plan", engaging major brands to jointly launch hundreds of C2M products and effectively link up the producer with the consumer. During the 3rd Retail Cloud Partnership Conference on August 11, 2020, a new round of cooperation was signed with China's appliance giants such as Midea, Haier, and Hisense, targeting a three-year sales volume of RMB100 billion. As part of this cooperation, Suning will focus on developing C2M products and other business directions, to bring about a swift recovery to the market.During the pandemic, Suning Retail Cloud stores targeting China's lower-tier markets have turned challenges into opportunities, as they have adopted a new retail model anchored in "social + community + livestream",  with social media community marketing becoming one of the main driving forces behind the traffic surge of Suning.com.Suning.com has developed more than 10,000 communities across China's social media platforms which serve as a massive traffic pool. Between January and May 2020, Suning Retail Cloud mini-programs, lightweight applications accessible through China's social and messaging app WeChat, have seen their average daily traffic increase rapidly. Online sales have skyrocketed thanks to Suning.com's social ecommerce strategy, as well as other online tools and campaigns for reaching and capturing new consumers.Winning the battle against poverty through rural revitalization Under the guidance of founder and chairman, Zhang Jindong, Suning has made poverty alleviation a primary objective. In 2020, the company set up a special working group to promote consumption-led poverty alleviation, coordinating its online and offline systems such as the Chinese Specialty Store, Suning Carrefour, and more. Over the course of just two days in August, the "Suning Poverty Alleviation Zone" was set up, selling products dedicated to this end. By the end of 2020, channels including the Chinese Specialty Store, Suning Fresh, and Suning Supermarket achieved total agricultural product sales of over RMB10 billion, all dedicated to poverty alleviation. As of the end of 2020, Suning has donated more than RMB2.3 billion in funds and equipment to charities and welfare organizations focusing on poverty alleviation and rural revitalization. Online, it is leveraging channels such as the Chinese Specialty Store to benefit 10,000+ poverty-stricken villages. Offline, it is actively exploring rural markets to open training and retail cloud stores, so as to sell agricultural products through all of its channels. On February 25, 2021, the State Council officially commended individuals and organizations helping end poverty in China Suning was awarded as Jiangsu Province's sole private enterprise for its notable poverty alleviation efforts.Sustainable development, for a greener SuningSuning is accelerating its environmental actions, drastically improving resource efficiency across its operations and promoting green development. A forerunner for sustainable and green packaging in China, Suning continues striving to reduce waste by optimizing and simplifying packaging for its products by exploring automation and intelligent technologies. As of the end of 2020, Suning Logistics has almost entirely transitioned to paperless invoices, and is also reducing the amount of tape and packaging used. Meanwhile, its recycled boxes have been used more than 150 million times. Given its leadership position in home appliances, Suning is also actively advocating for greener consumption while promoting recycling. In 2020, Suning recycled 760,000 home appliances and mobile phones through offline trade-ins by more than 600,000 participants. On May 18, 2020, Suning and the China National Institute of Standardization released the 2020 Air Conditioning Industry Whitepaper, in which it established the industry's first energy efficiency alliance to boost green consumption through initiatives such as trade-ins and interest-free payment installments. On the frontlines of the pandemic as a corporate citizenWhen COVID-19 emerged in early 2020, Suning immediately set up a working group and leveraged its global supply chain resources to deliver equipment to Wuhan. As of the end of 2020, Suning has donated more than RMB1 billion, while raising an additional RMB5 billion in supplies. "When a company is small, it is personal; when it is large, it is social and national," is a phrase that Mr. Zhang has uttered numerous times. In 2021, Suning will further strengthen its CSR efforts, empower industry growth, and serve society by focusing on supply-side structural reforms and modern, green solutions, to bring about high-quality development for the entire country. View original content to download multimedia:https://www.prnewswire.com/news-releases/suningcom-releases-13th-annual-csr-report-going-beyond-retail-to-focus-on-value-creation-301280907.htmlSOURCE Suning.com